As part of a family style Tex-Mex meal, the second most important element – next to tortillas – is beans. Particularly refried beans, which aren’t actually re-fried at all, they’re just blended until smooth… yeah, I’ve never understood where the terminology comes from either.

Traditionally, refried beans are made from black or pinto beans that’ve been cooked with bay leaves, chili powder, cumin, and potentially a few other spices, depending on the family that’s making them. Because we’re not using the flavors of Tex-Mex, we’re going to dress our beans up for a different occasion, starting with the type of beans we use. 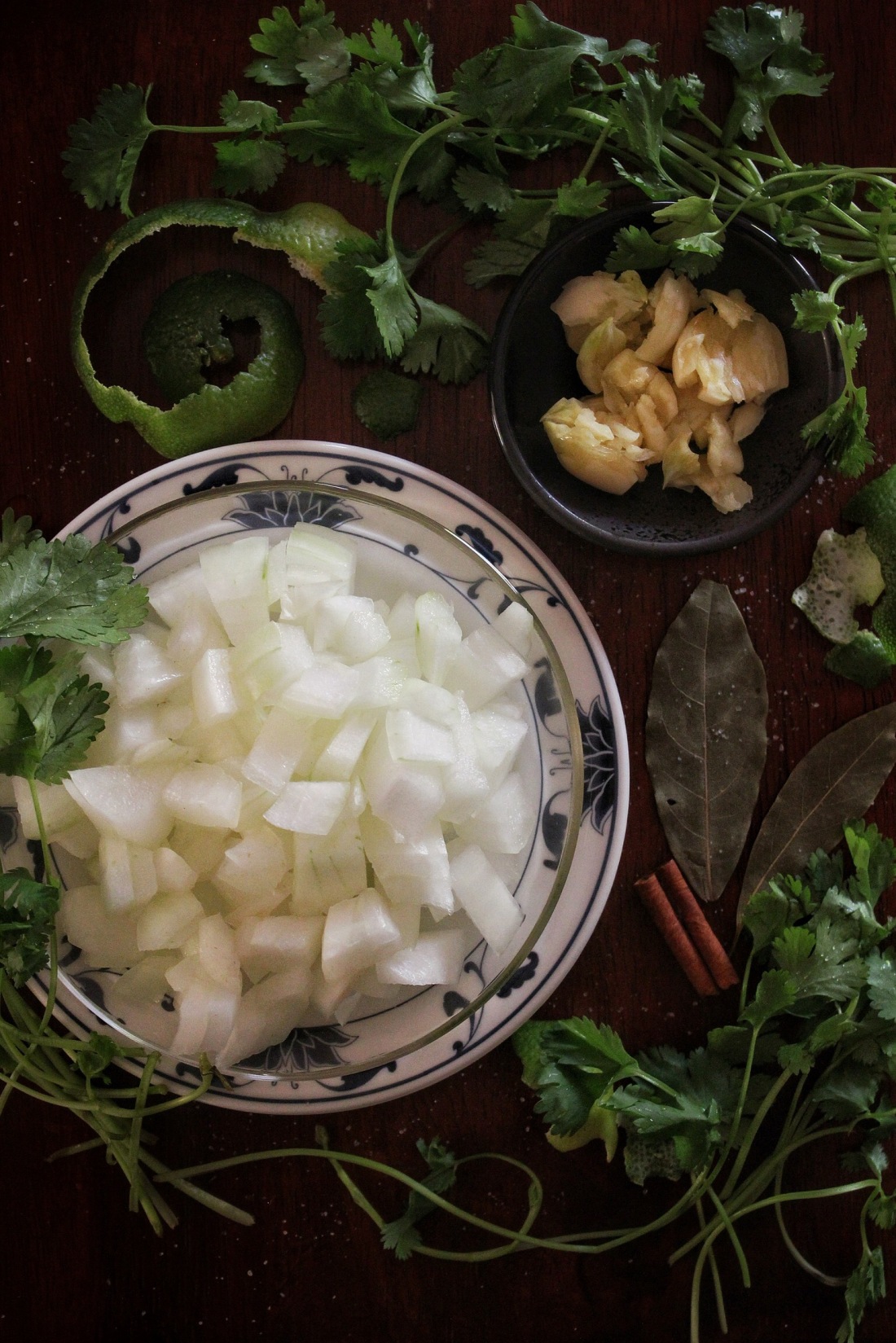 Although, before we continue, I’d like to state that the only beans I recommend eating are beans that’ve been pressure-cooked. The process of pressure-cooking legumes destroys all the lectins found in them, leaving the consumer with nothing but a cheap source of fiber, protein, and resistant starch – that stuff I talked about in the perfect white rice recipe – which promotes healthy gut bacteria growth. Unfortunately, if you don’t own a pressure cooker, there’s not much you can do…

Wait a second, there is an exception. The brand Eden pressure cooks all of their beans right in the can. On top of that, their cans are non-BPA, their products are certified organic, and they have a wide catalog of beans to offer. To simplify the ease of purchasing, they’re found at most Whole Foods!

If you neither have a pressure cooker nor can find Eden’s beans, I would recommend skipping this part of the meal, because beans and all other legumes contain some of the highest levels of lectins and phytochemicals found among plant foods. While most internet blogs state that soaking your beans overnight and fully cooking them will destroy most of the lectins, unfortunately that’s not true. Studies that examine the quantity of lectins in certain foods found that 98% of them can’t be destroyed unless they’re pressure-cooked.

Ponder upon this for a moment: have you ever had an uncomfortable feeling in your stomach, passed a lot of gas, felt bloated, or had diarrhea after eating beans? That’s a sign that you’ve consumed a toxic dose of lectins and phytochemicals that are going to work attacking your gut, entering your bloodstream, and signaling your body to attack itself. This is known as an autoimmune disorder, where your body is tricked into attacking itself because chemicals like lectins disguise themselves as healthy cells, which results in the body destroying it’s own cells while the lectins remain unharmed. For more information on the toxicity levels of certain beans and their potent lectin content, check out this link.

Now that we’ve got that covered, let’s return to the culinary side of things, shall we?

Instead of using traditional black beans, we reached for a can of Organic Black Soy Beans by Eden instead, which have a fluffier texture than black beans, are lighter in color on the inside, and are frequently used in oriental cooking. Then, we cook ’em with tamari sauce, cilantro stems, lime zest, star anise, cinnamon stick, and bay leaf, which impart this dish with a few key Chinese spices.

After cooking the beans and spices for at least an hour, the aromatics are removed, most of the liquid is drained, and the beans are blended or mashed with nutritional yeast, which – I know – isn’t traditional to Chinese cooking, but it does round the beans out with a boost of umami and added depth of flavor.

Like what your taste buds are tellin’ ya? Leave behind a nice rating, share your thoughts with us in the comments, or show us your creations by tagging @noeggsorham on Instagram.

All the best,
Kim & Ryan 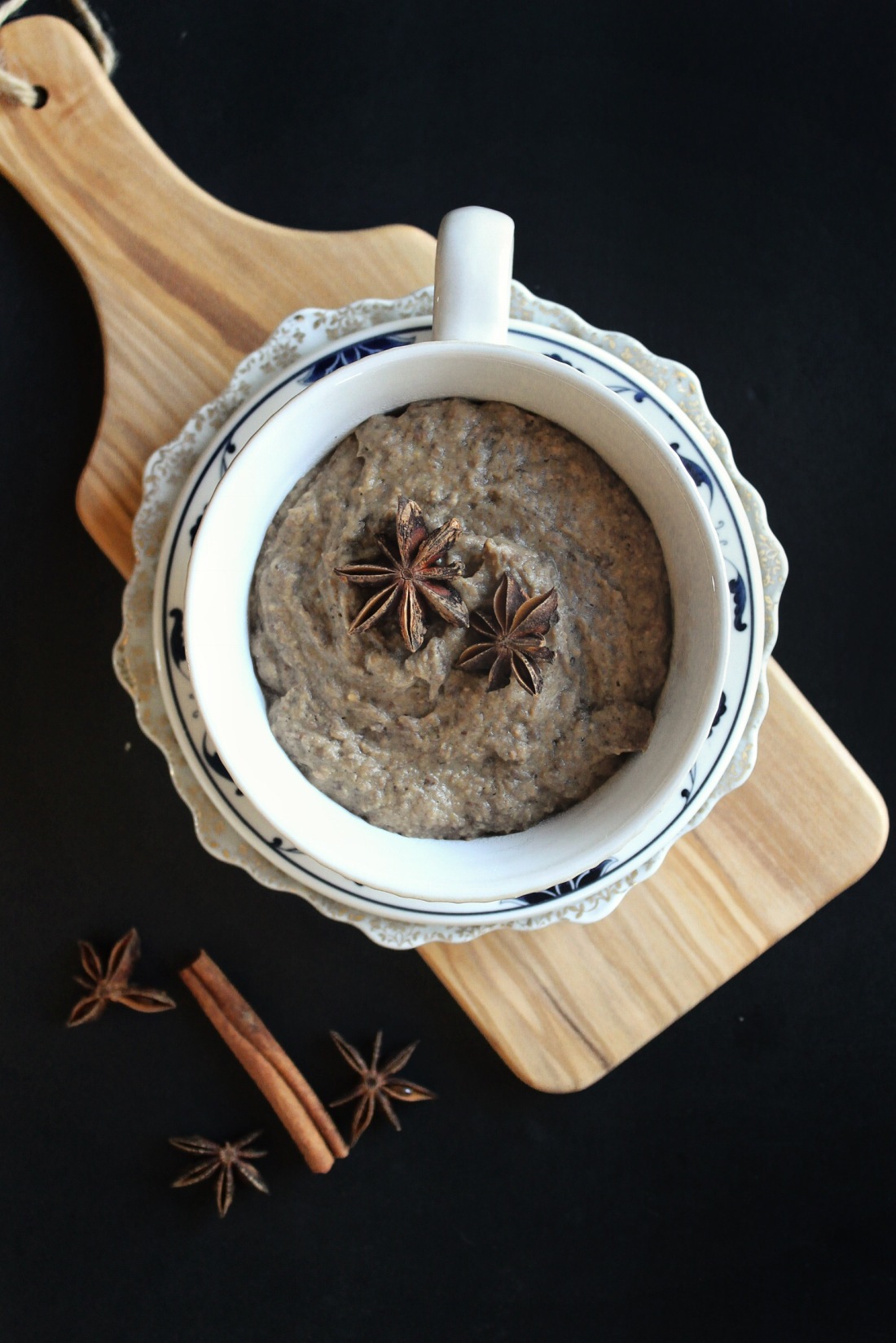 *If you decide to use the whole lime peel – not just grated zest – use your knife to scrape out the inner white part of the peel, which is called “pith.” Pith turns anything it’s cooked with bitter, so it’s best to remove as much of it as you can, leaving only the green part of the peel.