Tikka Masala is a type of curry – seasoned with garam masala, served in a creamy, tomato coconut sauce, and comprised of one main protein (typically chicken) – that originated in the UK by chefs of Indian background. This dish highlights many cooking techniques foreign to most American cooks, such as myself, which makes it all the more fun and exploratory! 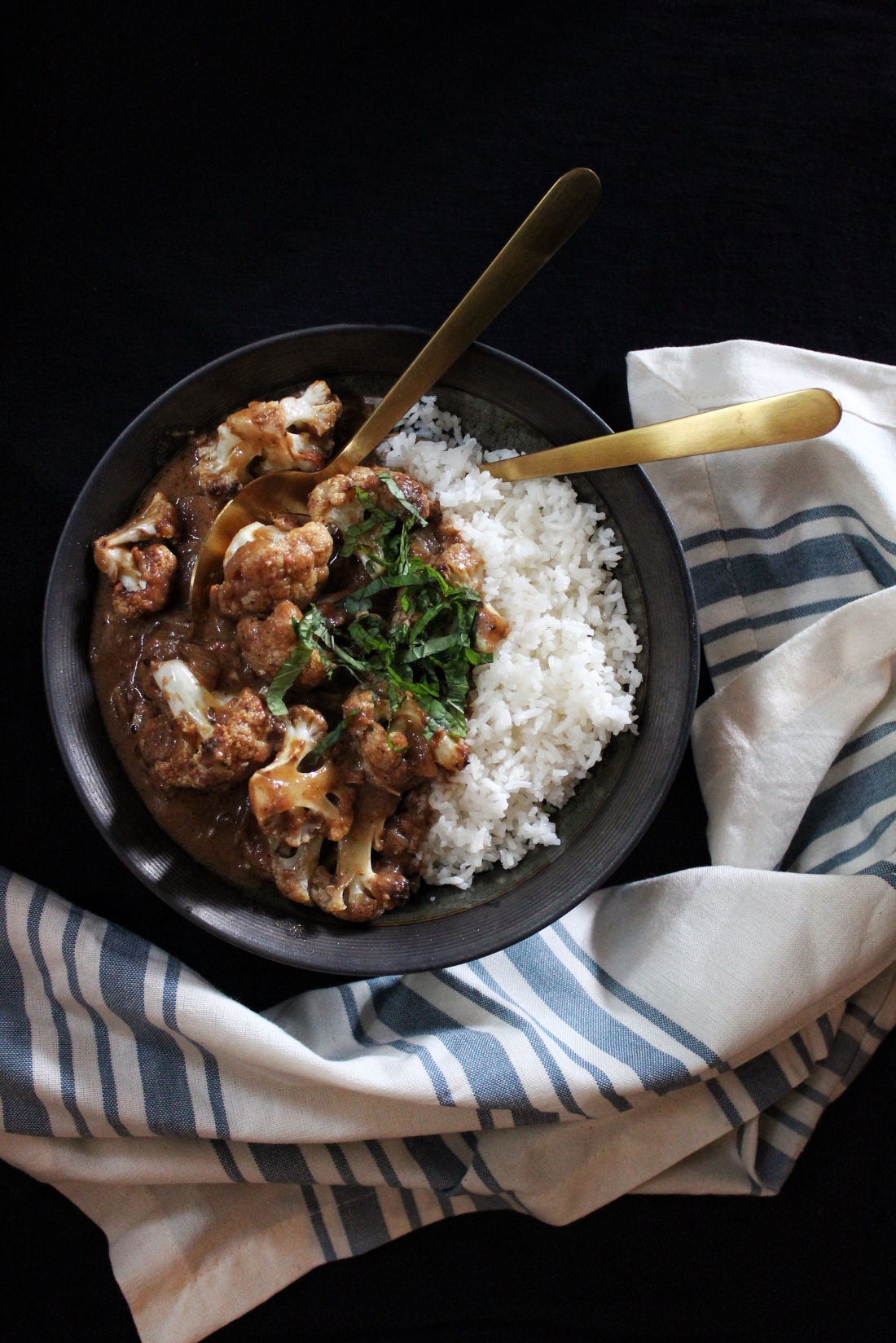 First off, tikka masala can’t be discussed without addressing the mixture of spices it earns its flavors from: garam masala – which instills many Indian dishes with their distinct flavor. Garam Masala almost always includes these spices in various amounts:

Atop of this foundation, other spices – such as fenugreek and cayenne – are often added to a dish to mend its flavor however the chef so pleases. The process of making garam masala is quite simple: toast spices in pan for 2-4 minutes, grind using either a mortar & pestle or electric coffee grinder, and use!

The most extraordinary aspect of tikka masala however is the traditional cooking method used for the meat. First, chicken or lamb is marinated in a yogurt based sauce – the acids in which encourage saliva production, which also begins the process of digestion, thus causing the meat to seem more tender than it actually is. After the meat receives it’s flavorful yogurt bath, it’s cooked in a tandoor, which is a type of Indian oven where extremely hot charcoals are placed at the bottom of a large unglazed, ceramic vessel. Long skewers, pierced with the marinated meat – and sometimes vegetables – are placed in the tandoor and cooked at temperatures upwards of 800° F. The meat and vegetables closest to the coals receive a special type of char that’s signature to this Indian styled dish.

Alton Brown demonstrates how one can make a relatively inexpensive tandoor at home in his episode of Good Eats, “The Curious Case of Curry.” Unfortunately, I don’t have the financial resources, yard space, or desire to ball out on making my own tandoor, and I don’t assume that you do either, which leaves us with two cooking methods: charcoal grilling or oven broiling, both of which utilize direct heat that instills high temperatures upon its culinary victim. Because I don’t have an outdoor grill, I use my oven’s broiler.

In the sauce, it’s key that onions are caramelized over medium-low to medium heat for 10-15 minutes until they are deeply browned around the edges. This process brings their sweetness to the surface, which will then imparts the tikka sauce with incredible sweetness. Another crucial ingredient in tikka sauce is tomatoes, which could have your head spinning if you follow a lectin-limited diet, but worry not – they’re peeled and deseeded, which removes them of all harmful lectins. Afterwards, there’s still a rather significant amount of sugar in them, especially once cooked down, but, being an enthusiast of both health and culinary traditions, my intention is to respect every culture I base a dish off of, and to remove tikka of tomatoes would be a major disservice to its origins. I mean, if an Italian saw a “marinara sauce” without tomatoes, she would flip. Removing meat and dairy already defies tradition, however, I believe the flavors of this would equally satisfy a frequent curry house goer in London, where tikka masala is one of the most popular dishes in the city. To remove tomatoes, however, would completely cast out the essential essence of this curry. So, if you’re gonna eat them, follow these rules: eat them when they’re in season in your area (Summer), remove the skin, remove the seeds, and eat them sparingly as a treat. For their sugar content is not to be messed with a daily basis.

Because yogurt is essential to the flavor profile of this dish, our cauliflower is marinated in a mixture of homemade garam masala, coconut yogurt (we prefer homemade), and a lil salt. By the way, to make your own coconut yogurt, all you need is a can of full-fat coconut milk and two probiotic capsules. Pop open the capsules, stir the probiotics into the coconut milk, loosely cover with a piece of cheesecloth or paper towel, and let sit for 24-48 hours at room temperature. Then, refrigerate until cool! Minimalist Baker has a great how-to page on coconut yogurt that highlights how simple and affordable making your own actually is. 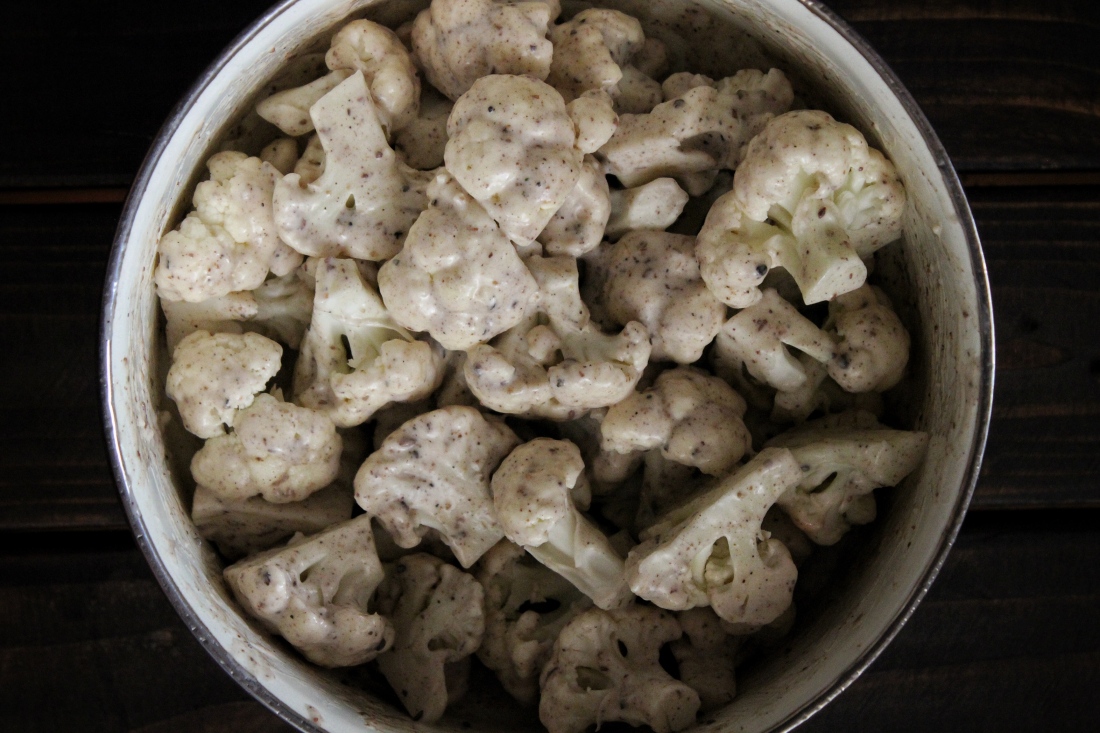 A little bit on the etymology on this dish: both masala and garam derive from the ancient, Northern Indian language, Urdu; masala meaning “mixture” and garam meaning “pungent,” thus, garam masala = “pungent mixture.” Tikka means “bits” in the Tamil language, often found in the form of pieces of chicken found in Tikka Masala. Put together the pieces of this etymological puzzle to discover “Chicken Tikka Masala” means “Chicken Bits Mixture.”

Doesn’t sound very appetizing, does it? With this meaning in mind, it’s easy to understand why there are so many different variants of this dish; as long as your tikka masala contains bits of food and garam masala, no one can technically say you that what you have isn’t tikka masala. Although, I strongly advise against that approach. 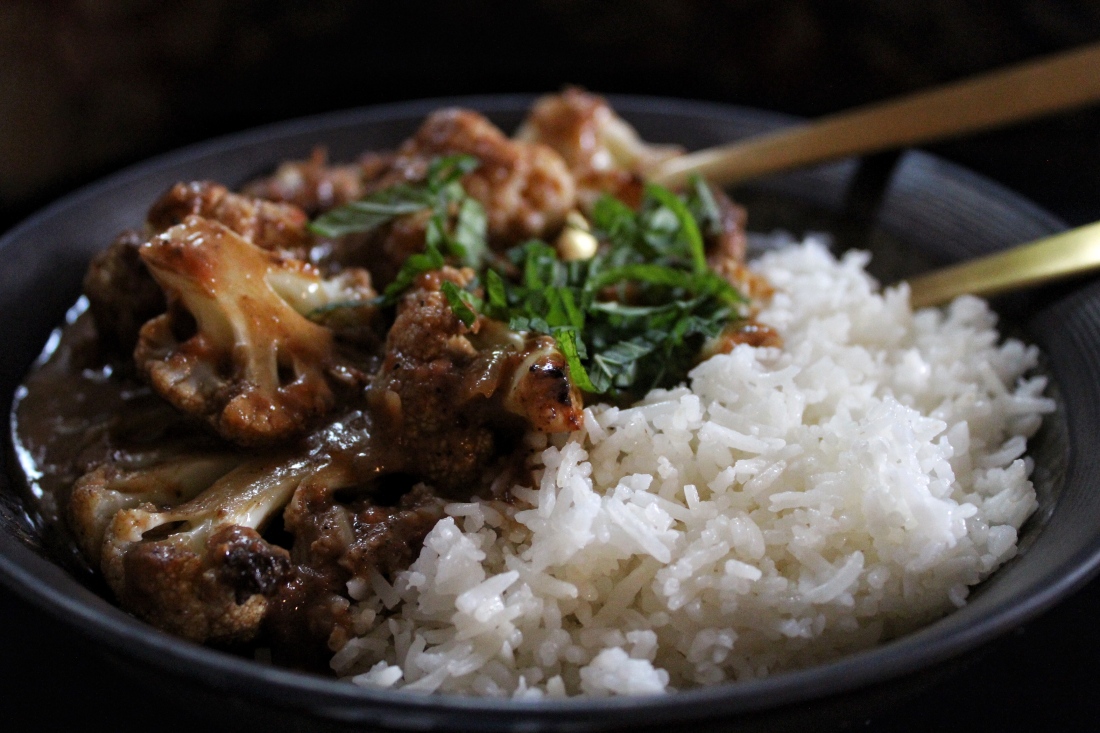 No doubt, tikka masala has a complex history, but it is a meal with textures and flavors rich enough to blow one’s palate off the charts. This dish is creamy, fragrant, savory, soul-satisfying, and mouth watering (my mouth is legitimately watering as I type this). This cauliflower tikka is a dish worthy of a family dinner or romantic night in between you and your lover.

Recommend us a dish to create for October here! Since October is going to be theme-less, nothing is off limits November, however, will have a heart warming, nostalgic theme… are you ready for Thanksgiving?

*I used Early Girls, a.k.a. Dry Tomatoes, which were easy to peel, deseed, and are sweet in flavor. I don’t recommend using Heirloom tomatoes because they are the biggest pain in the behind to peel and deseed, given their unorthodox shape.