I’m SO happy that November is here – it’s probably the best month for an American food blogger, given the entire country’s hype around food.

November also happens to be our first magazine feature (did I spill the beans too soon?). That’s right, No Eggs or Ham will have a couple of recipes inside the November issue of Vegan Lifestyle Magazine! We can’t believe it either. 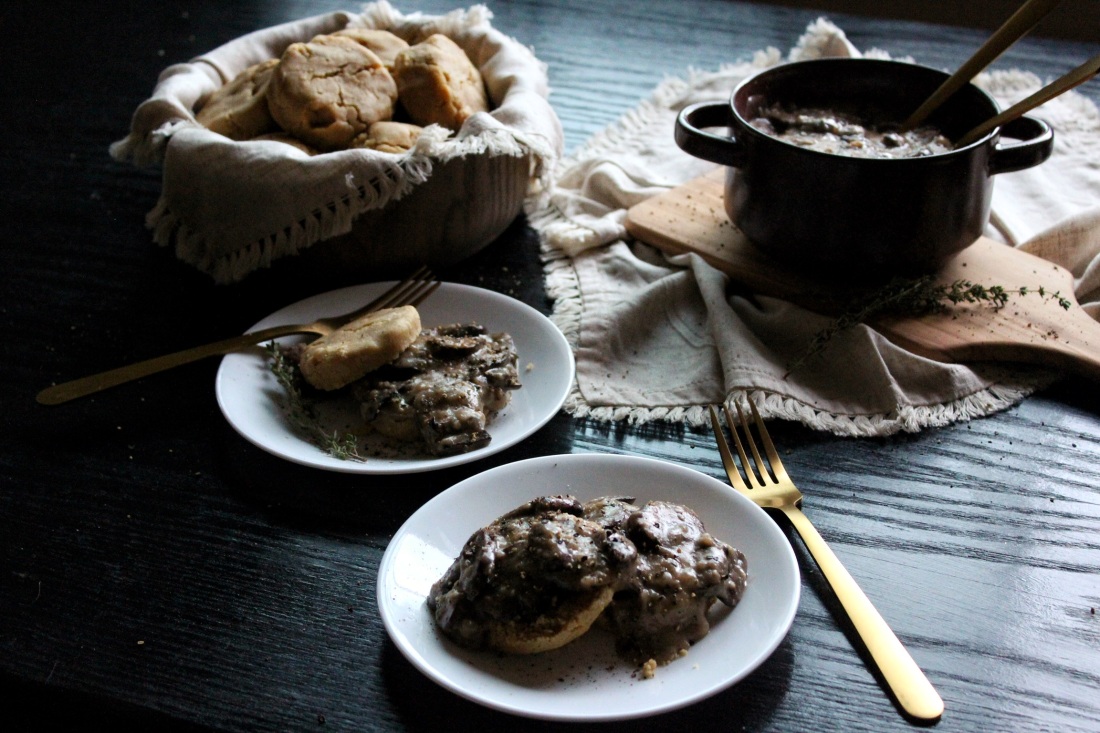 But enough about us, let’s talk about food.

Sausage Gravy & Biscuits is a meal I grew up with and ate every single Thanksgiving and Christmas morning. Soft, pillowy biscuits were drenched in creamy, savory, spiced sausage gravy.

Looking back on it, it’s kind of like my modern diet’s nightmare: meat, dairy, and wheat?! IT’S FRIDAY THE THIRTEENTH ALL OVER AGAIN.

Although there’s no reason to get worked up, since any food can be adjusted to fit one’s dietary needs. This meal is no exception – all it needed was a few biscuit test trials.

See, biscuits aren’t a complicated food. To make them, cold fat (normally butter) is cut or rubbed into a mixture of flour, leavening agents (baking soda & baking powder), and salt, leaving small, flat flakes of butter in the dry ingredients. Then, buttermilk is stirred in to bring the dough together, which – because of its acidity – will assist in browning as well as rising. Comparatively, making biscuits is quite similar to making pie crusts, the only differences being that biscuits have more moisture and leavening agents.

Now, I reckon that biscuits acquire their magical voodoo not from their ingredients, but from how they’re made. So, what if we just replace the unacceptable ingredients – wheat flour, buttermilk, & butter – and call it a day? It sounds simple, but alternative flours behave differently than wheat flour. Thus, subbing out wheat flour for sorghum flour, for example, would leave us with biscuits that have a mealy, dry, cornbread-like texture, which isn’t what we’re going for.

So, to achieve proper texture, a blend of flours is needed. We made three test batches before accomplishing the ones you see in these photos, during which time we discovered that cassava flour lends a sticky, moist texture. Our first batch, which was made exclusively from cassava, came out a bit gummy, stretchy, and dough-y. Our second batch, containing 2 parts cassava and 1 part sorghum flour, came out slightly mealy & dry, not completely unlike biscuits served in low quality restaurants. The third time around, we used 7 parts cassava and 1 part sorghum flour, which created a moist and lightly chewy biscuit with just a lil’ grit to it, without any of the gumminess of our first batch or dryness of our second batch.

Now, I’m not going to tell you these are exactly the same as wheat flour biscuits, because they aren’t. Compared to normal biscuits, they are lightly spongy and not as flaky. However, they are still identifiably biscuit-like in texture & flavor.

The biggest contributor of flavor in normal biscuits comes from butter, which – unfortunately – I don’t eat the normal stuff OR the vegan substitutes…. until I stumbled across a hidden gem in the grocery store: Nutiva’s Buttery Coconut Oil, which is a product made out of organic coconut oil, ethically sourced Red Palm Oil, and magically tastes like butter. Honestly, I don’t know how they do it, but this stuff smells and tastes like the real deal. Better yet, it contains no moisture, meaning it’s shelf stable, i.e. you ain’t gotta refrigerate it.

Nutiva’s buttery coconut oil contributes that traditional biscuit flavor that people think of when they think of biscuits. But, if you can’t find the stuff, coconut oil can be used in its place to create the same texture, only without the buttery flavor. Whichever fat you decide on, it’s important to chill it prior to use, as it needs to go into the dough while solid, then melt once in the oven. If the fat melts while you’re handling the dough, it’ll become runny and the texture won’t be as flaky as it can be.

Another traditional element in biscuits is buttermilk, which is a creamy, fermented, tangy milk often used in southern recipes. In baking, buttermilk’s most important element is its acidity, which is similar to that of yogurt. Thankfully, all we need to create a vegan buttermilk substitute is light coconut milk – or a half/half mixture of full fat coconut milk & water – and a touch of acidity such as apple cider vinegar, white distilled vinegar, or lemon juice. Simply mix them together a few minutes prior to baking and you’ll have a buttermilk substitute that’s ready for any southern recipe.

I should also mention that you will notice that all of the biscuit recipes are measured out via weight – grams for the dry ingredients and ounces for most of the wet ingredients. I don’t do this because I have a secret tie to the kitchen scale industry. I call for the ingredients to be measured by weight as it’s the most accurate method of measuring dry ingredients, which is crucial to achieving the correct results when it comes to baking. For example, the difference between a cup of compacted cassava flour and a loosely packed one can have a difference of 30 grams, which can mean the difference between moist biscuits and desert dry biscuits. So, for the most desirable results, weigh your ingredients!

Because I’m a good ‘ole Florida boy, these biscuits remind me of childhood; they’re fluffy, buttery, and lip-smacking good. They’re great when freshly baked, sliced in half & toasted until lightly caramelized, or served under a bed of hot, flavorful, mushroom gravy.

Mushroom gravy is obviously quite different than the sausage gravy I grew up with, being that it has no pork, no milk, and no wheat roux. Instead, our gravy is more on the “sophisticated” side of the culinary spectrum… for once.

To create the gravy, sautéed onions and garlic are pureed with arrowroot starch and a healthy dose of black pepper. Then, that slurry is stirred into nutmeg and rubbed sage seasoned mushrooms that’ve been reduced down to a third of their original size. Once the gravy has thickened, an herbal uplifting is brought about via fresh thyme leaves.

If whole mushroom slices in gravy isn’t your thing, there is an option available to make their texture resemble ground sausage. To do such a thing, prior to cooking, pulse your mushrooms in a food processor until they break down into fine chunks. Because their size is much smaller, they’ll also require less cooking time. Either way go, you’ll have delectable mushroom gravy in your tummy.

This Thanksgiving Day, take the time to enjoy a soulful breakfast that’ll fill you with bounds of energy for the rest of the day. We hope you enjoy our first Fall Favorite of the month ~ we’re so excited to show you what’s in store these coming weeks!