Red velvet cupcakes are the epitome of a perfect dessert. They’re decadent, pretty to look at (that’s half the point of confections, right?), and they’re personally portioned, so it’s even better if they’re jumbo sized.

Sadly though, cupcakes are often disposed to boxed cake-mixes or in-store purchases, both of which can be sickeningly sweet and lack the depth of heart necessary to make desserts grace the soul. No, I think the best way to achieve the ultimate red velvet cake is to do it from-scratch, in our kitchens, using only ingredients we can pronounce.

After playing with green banana flour, I’ve come to realize that it’s nearly the perfect baking flour. For one, it doesn’t have to be mixed with other flours or starches, which is good because figuring out those ratios is an actual nightmare. Secondly, green banana flour is a minimally processed whole food, so it’s healthy! It’s full of complex carbohydrates, resistant starches, and prebiotic fiber, all of which support a balanced gut flora. Thirdly, it creates baked goods that are light & fluffy without any fuss, making muffins, cakes, and other pastries a piece of cake… literally! 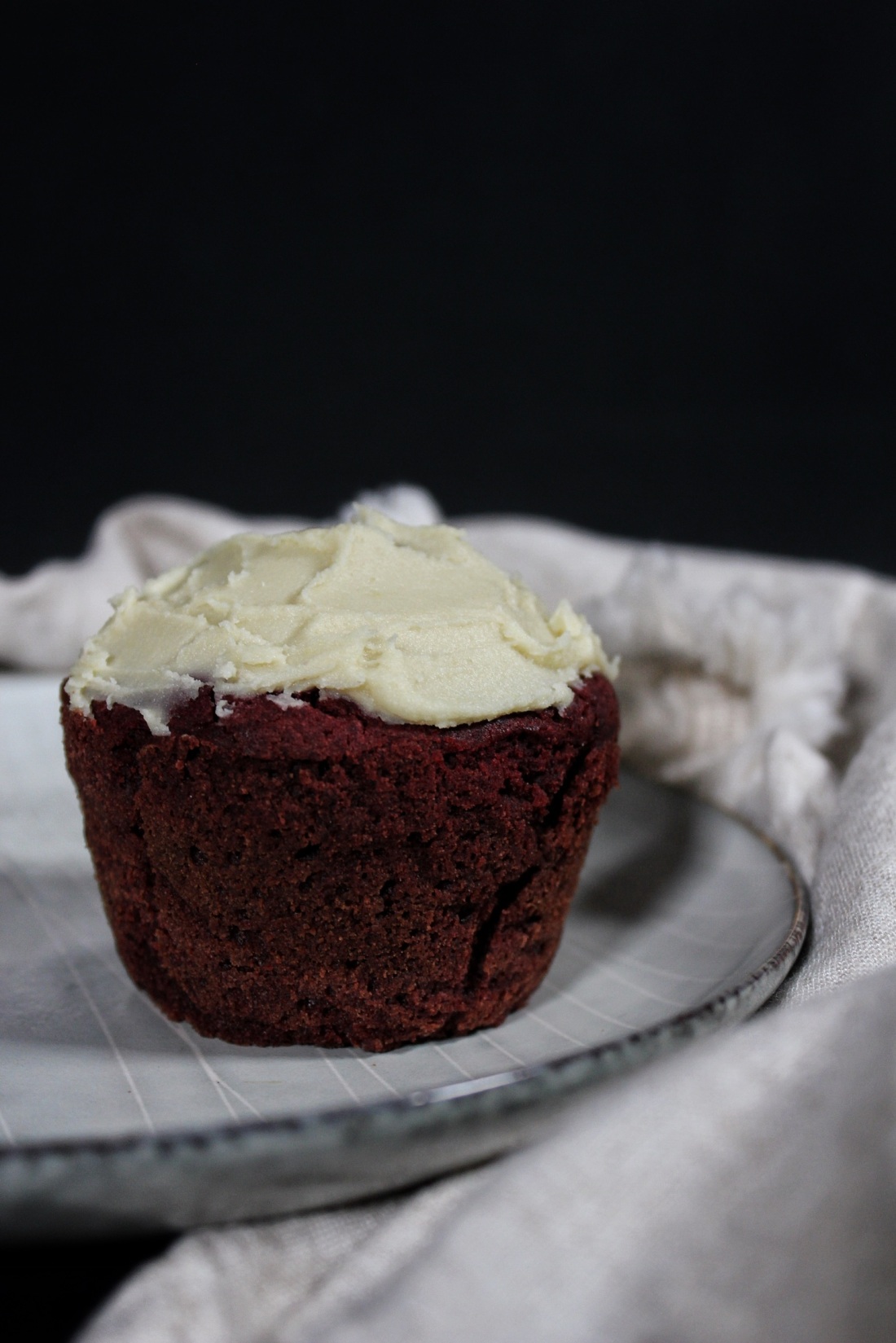 In little amounts, nutritional yeast can even be used in desserts – as if you thought we couldn’t find another use for it. Come to find out that coconut cream, lemon juice, coconut butter, Swerve “powdered sugar,” vanilla extract, and a ‘lil bit of nutritional yeast form an amazing vegan, sugar-free cream cheese frosting. It’s lightly tangy, slightly “cheesy,” stable but soft, and sweet without being overly sweet.

You might be wondering what makes these beautiful babies glow vibrant red like Satan, but trust me, no devilish wizardry is in effect here. Rather the magical potency contained within a beet is what’s responsible for their color, and we didn’t even have to touch a beet!

Let me explain: I love beets, but if roasted and consumed in large amounts, they can seriously spike blood sugar levels, which isn’t the biggest concern for me, but can be a serious problem for many people. Thankfully, however, someone figured out how to concentrate a beet’s pigment, turn it into a liquid, and sell it as natural food coloring, which is something I think all of us can get down with. Two ounces of beet food coloring and the batter looks like radioactive goo from a planet whose heart has a gravitational pull strong enough to reel in even the toughest of souls (it’s probably Venus, isn’t it?).

If you’re familiar with the creaming method, then making these cupcakes is a sheer breeze. It goes a ‘lil somethin’ like: whip aquafaba to stiff peaks, beat coconut oil with erythritol, add wet & dry ingredients in batches, fold in aquafaba, and bake! You got it? Alright, let me get you to that recipe before you suffer from a lack of cupcakes (it’s a serious thing, ya know). 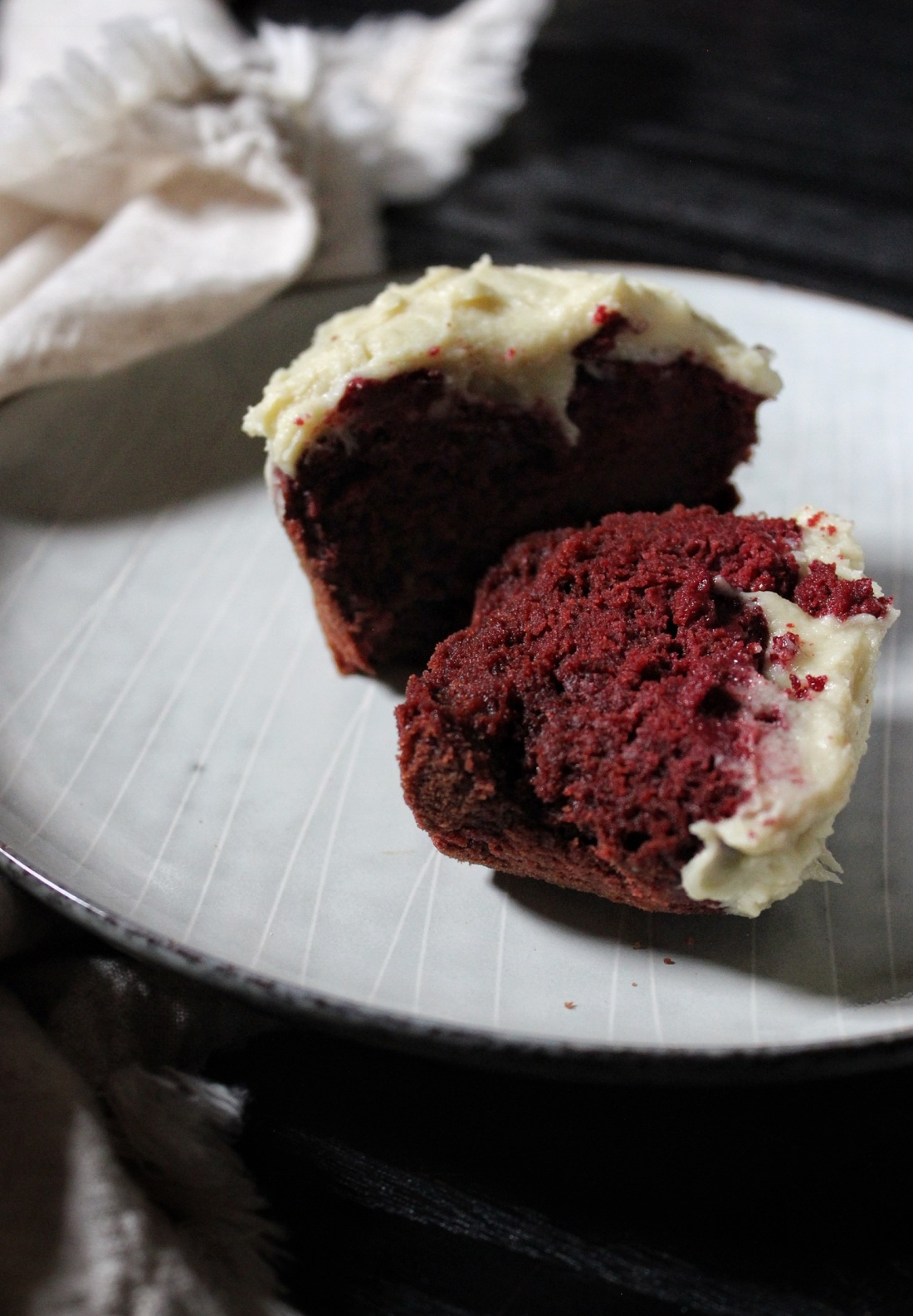 *When it comes to “light coconut milk,” I use coconut milk from a carton, such as brands like SoDelicious sell. However, if you only have full-fat canned coconut milk on hand, you can thin out 1/4 c of it with 3/4 c of water for the same effect.

*The name of the food coloring we used is called “Select Natural Color Red/Pink,” its ingredients are glycerin (more on that ingredient in this post), beet extract, and water, and we bought it from Whole Foods.

*We didn’t experiment with any other food colorings or dyes, but I’m confident that other brands or “beet extracts” will work, I’m just not certain about the amount to use.