I didn’t take my first sip of hot & sour soup until 2016, after Kim & I returned from Australia and were craving Chinese food. I ordered what I was used to – General Tso’s Tofu – but Kim ordered Hot & Sour Soup. What in the world? Not getting a fried protein tossed in a sweet sauce? I was perplexed.

Upon lifting the spoon to my lips though, I understood why this is a soup worth ordering on its own. Its flavors are bold yet deep at the same time. First, you get hit with a punch of saltiness from soy sauce, followed by a kick of sour from vinegar. Then, after you’ve gulped it down, flavors stay lingering in your mouth – transforming – making you want more so you can try to understand it. With the correct combination of a few simple ingredients, this soup becomes far more complex than its individual components. Magic? Nah, just the culinary arts.

The first word in the name of this soup – “hot” – is one culinary accent that I feel lacks in most restaurants’ soups – probably because they don’t want to burn the face off of their customers! Because I’m my own chef, however, I take personal responsibility in burning my face off, which means there’s no one to sue if my soup is too spicy.

Jokes aside, Hot & Sour Soup is meant to be spicy, as the “hot” refers to its spiciness, not its temperature. If you’re not acclimated to spice, then start out with a low amount of chili paste and add more as your heart desires. Kim & I did the opposite by adding far too much chili paste, thus making this the spiciest thing I’ve ever ate. Not that that prevented me from slurping down every last drop – I’m a bit of a heat enthusiast.

If you’ve never had Hot & Sour Soup, you can expect this one to have a tangy & salty, lightly thickened broth laced with chewy shiitake mushrooms and crunchy black fungus. Unlike many soups, this one doesn’t take half a day to make; as I’ve said before, American-Chinese cuisine is designed to pump out takeout orders in less than 15 minutes, which makes most of their dishes easy on the watch.

We hope you enjoy our 1-pot, vegan & lectin-limited rendition of Hot & Sour Soup! If you like what your taste buds are tellin’ ya, leave behind a nice rating, share your thoughts with us in the comments, or show us your creations by tagging @noeggsorham on Instagram. 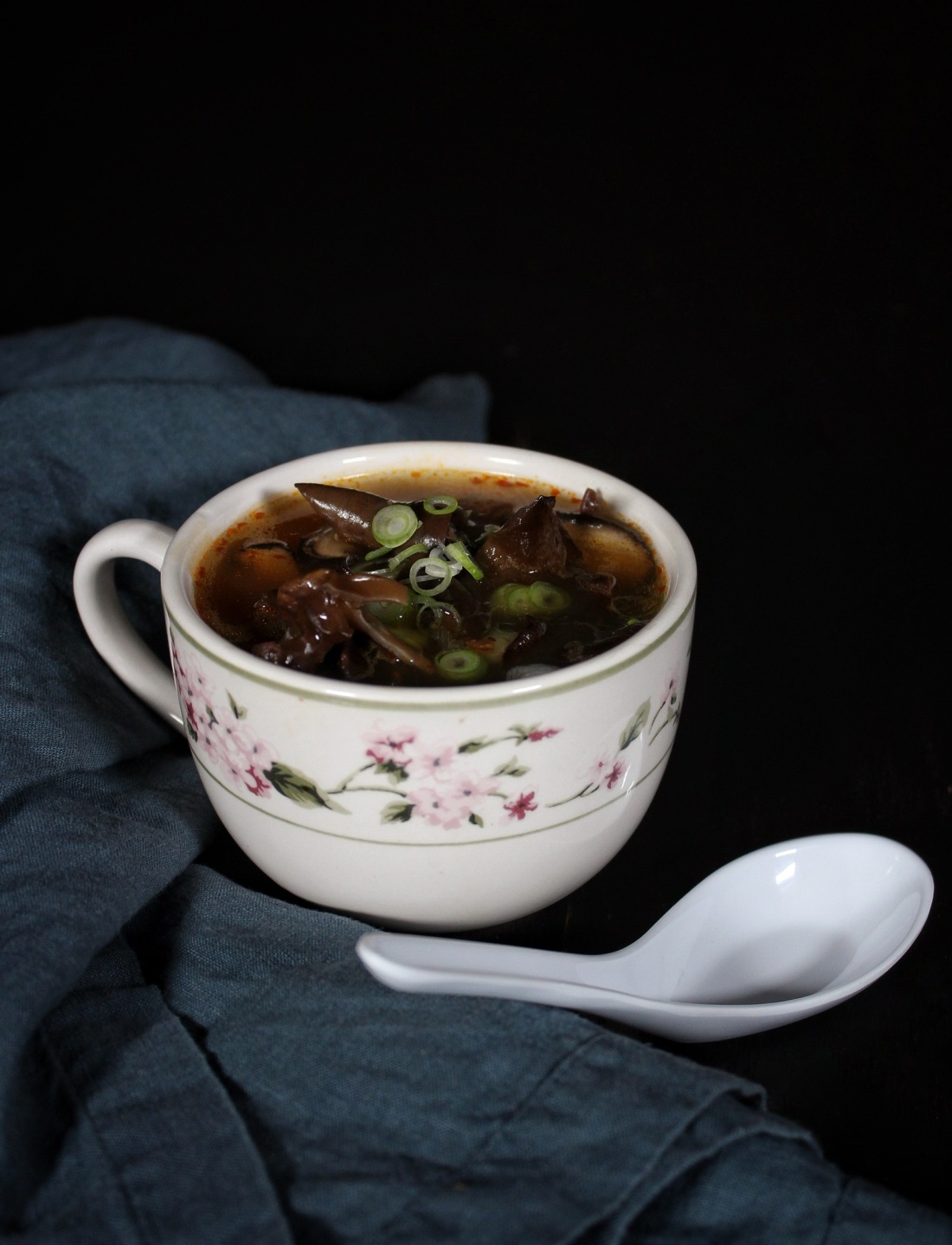 *Black fungus may sound like a foreign ingredient, but it’s cheap and easy too find in most oriental markets.

*If you don’t have bouillon cubes, substitute the water for “not-chicken broth.” The flavor will be the same – the bouillon cubes are simply more economical.

*Kim & I used 1 tablespoon of chili paste, not 1 teaspoon, which made the soup fiery hot. So I suggest you start off with a teaspoon and add more as desired. Use linked chili paste if lectin-limited.