On a recent trip to Oakland, California, my infatuation for soul food was magnificently re-sparked. Little did I know, one of the predominate cuisine’s in Oakland is Southern and Creole inspired; mixed with San Fran’s perseverance for progressive thinking, much of that soul food is also vegan. We particularly fell in love with one particular joint called “Souley Vegan,” which is a family owned restaurant serving up vegan renditions of chicken fried steak, shrimp po boys, and other comfort food classics. The food was drenched in passion but the people were even more lovely. The owner was working in the kitchen, the hostess didn’t pay the line ou-the-door any attention, and the waitresses were elated to be there. And that’s on Valentine’s Day – one of the busiest days of the year. 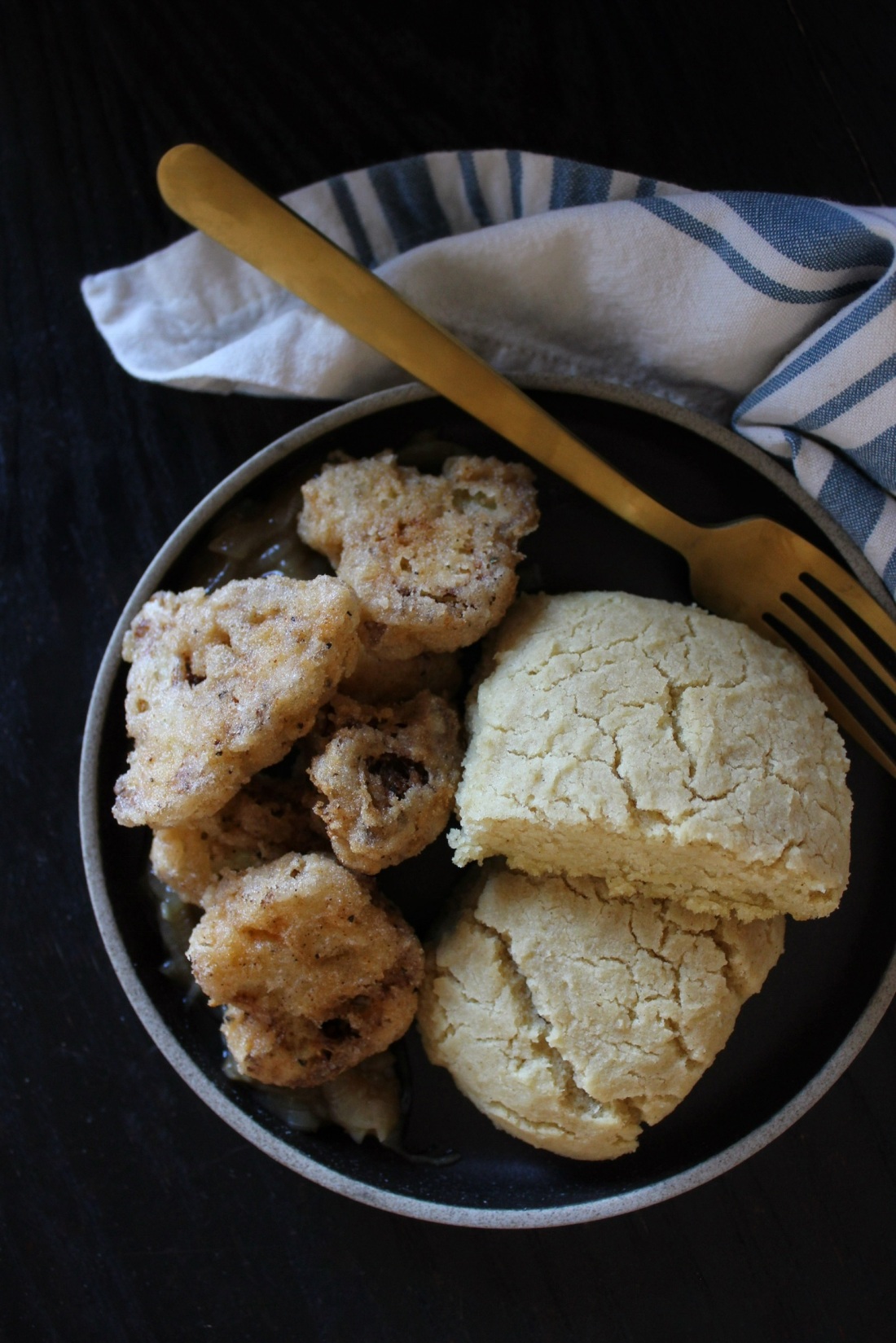 I apologize for my love story, but this is the essence that make soul food what it is. On a physical level, it’s not the healthiest food in the world, but on a spiritual level, it fulfills every part of the being, which is entirely as important to me. When the focus becomes to magnified on the physical benefits, the feeling of the food becomes obsolete, which is why I bask in the sunlight between both ways of thinking; some of our recipes satisfy those looking for an indulgent meal while other recipes will satisfy those looking for the healthiest breakfast possible.

Never the less, this recipe is still grain-free (minus the biscuits, which have sorghum), sugar-free, cooked using healthy fats (coconut oil), gluten-free, and entirely lectin-free. We live in the age of “no compromise.”

Opposed to our Buffalo Cauliflower Wings, we treat this cauliflower like southern fried chicken, which is battered differently than chicken wings. Southern fried chicken is typically dipped into a mixture of buttermilk and hot sauce, then dredged in a mixture of flour and spices. Our take on this is to dip our cauliflower pieces in a mixture of full-fat coconut milk mixed with Louisiana hot sauce, then dipped into a combination of arrowroot starch and cassava flour plus garlic, paprika, and other spices.

Southern chicken is then usually fried in peanut, corn, or vegetable oil, because each of these are affordable, reusable, and have a high smoke point. Unfortunately, most “healthy” oils don’t have all three of these characteristics. However, refined coconut oil can be sustainably heated to 350° F without smoking, it’s relatively affordable (cheaper than extra virgin olive oil, more expensive than vegetable oil), and it’s reusable. It’s lifespan can be extended by reusing the same oil until it’s all dissipated from the little bit that’s absorbed each time, which is about five to six times. 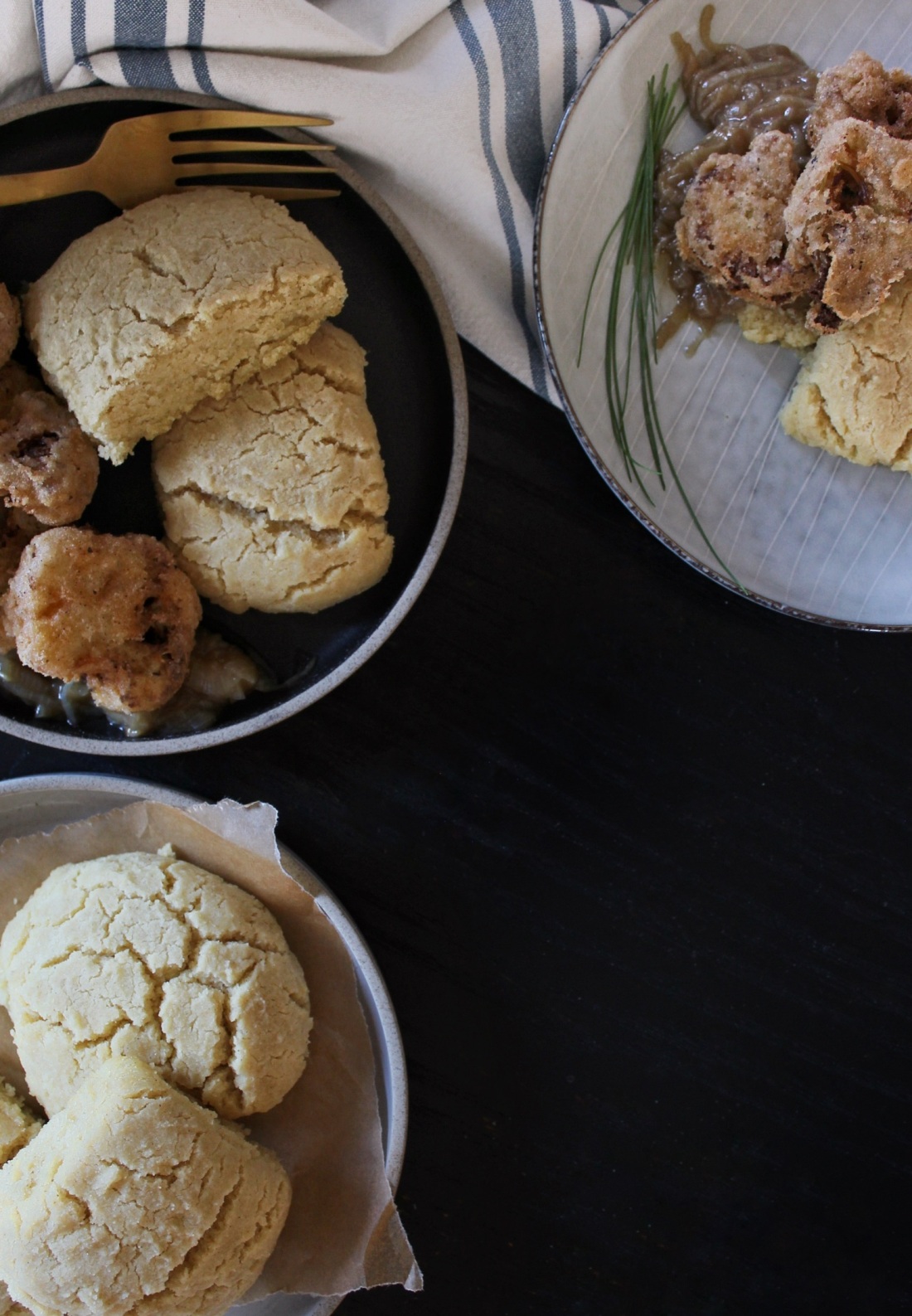 Instead of pairing the cauliflower with sausage style gravy, which would be delicious indeed, we decided to go with a caramelized onion brown gravy, which is hearty, savory, sweet, and thick. It’s as simple as cooking a thinly sliced onion over low heat with a touch of oil and salt until it’s greatly reduced in size, golden brown, floppy, and sweet as caramel. In fact, caramelizing onions is much like making caramel, as the slow heating of both processes breaks down sugar molecules into entirely different molecular structures. Essentially, heat changes the nature of sugars, which is apparent by caramel (and caramelized onions) deep, roasty taste.

Once the onions have thoroughly caremalized, which takes about 25 minutes, a slurry of mushroom broth and starch is stirred in, the heat is raised, the mixture thickens, then it’s ready for consumption!

As far as serving goes, it doesn’t get any more deliciously Southern than serving it alongside fluffy, buttery biscuits, which we have a recipe for that’s entirely lectin-free, vegan, and gluten-free! If you don’t have cassava flour on hand or it’s just not your thing, we recently swapped the cassava flour in the biscuit recipe with white rice flour – plus a 1/4 tsp of xanthan gum – and had amazing results. Cassava produces biscuits that are a little bit denser and moist, whereas rice flour produces biscuits that are lighter and more crumbly. If I had to choose one over the other, I wouldn’t – they’re both incredible.

All in all, this Chicken Fried Cauliflower with Caramelized Onion Gravy is: 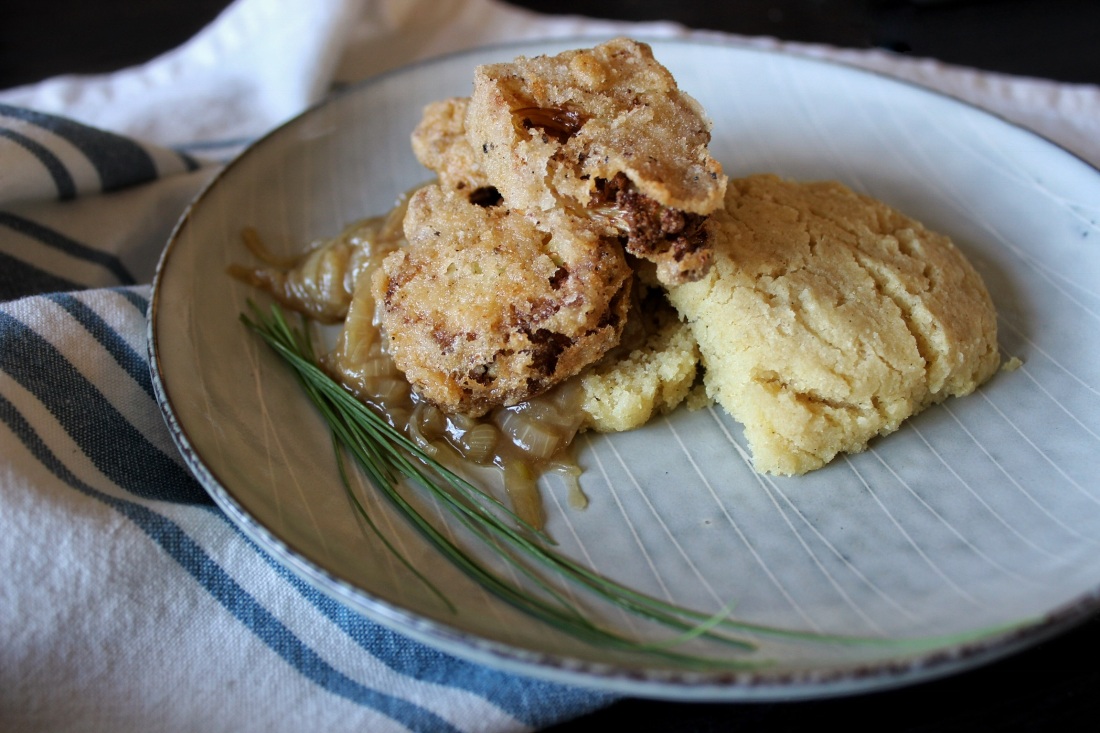 *Smooth hot sauces, such as Louisana hot sauce, are lectin-free because they don’t contain any skin or seeds, which are the only parts of peppers that contain lectins.

Leave a Reply to No Eggs or Ham Cancel reply