Battle of the Avocado Toast: Ryan vs Kim

Going head to head in a battle of toast!”

“Aha, thank you announcer. Yeah, that’s right. Today, we have Kim and Ryan, a young couple living in sunny Los Angeles, fighting for glory, using toast as their swords. The rules are… well, you know what we think about rules around here – who needs em?

No but seriously, they’re limited only to what’s in their kitchen, which isn’t much, you can believe me! I’ve seen it – these kids are really struggling for funds pursuing their ‘food blogging careers.’ What a joke!

Sorry sorry, back to the battle! Today, Kim and Ryan are going to be utilizing similar ingredients, only they’re going to shoot for different flavor profiles using separate techniques and seasonings. I see that they’re both reaching for French bread, half a ripe avocado, vegan caviar or ‘seaweed pearls,’ and toasted nori. As if we thought avocado toast couldn’t get more hipster than it already is!

Right off the bat, they’re taking different approaches on the way they slice their bread – Ryan’s doing a simple thick cut whereas Kim’s cutting it on the bias, Italian Bruschetta style. It appears they’re going to be using the broiler as their main weapon today, which makes sense because putting those hefty slices of bread in a standard toaster can be a bit clunky!

I’ve noticed they’ve started to embark on different directions, so let’s break this down person per person. I’ll kick it over to you Lynda!”

“Thanks Tom. Down here on the battlefield, Kim has just toasted one side of her bread golden brown and is now removing it from the broiler. She’s spreading on a hefty layer of vegan butter by Melt – gosh dang, does that girl love her butter – as well as finely minced garlic and little pieces of that nori we saw earlier.

Now it’s going back under the broiler! Wow, that’s going to enhance those flavors and sink them deep into the bread – smart move, Kim! The toast is coming out from the broiler a second time and that butter is bubblin’. On top of that toasty goodness she lays on thick slices of avocado and a subtle squeeze of lime, followed by a line of that vegan caviar, a sprinkle of large sea salt flakes, toasted sesame seeds, and finally, a decorative piece of nori. What an exquisite piece of toast we have here. Is there anything you’d like to say about your piece, Kim?”

“Yeah, I’d just like to say that this is going to be worlds – no, galaxies better than what that kid Ryan is mak-..”

“Okay! I think we’ve heard enough here. Thanks… for sharing. Can we put up some pictures of her toast for the audience to see? Great.” 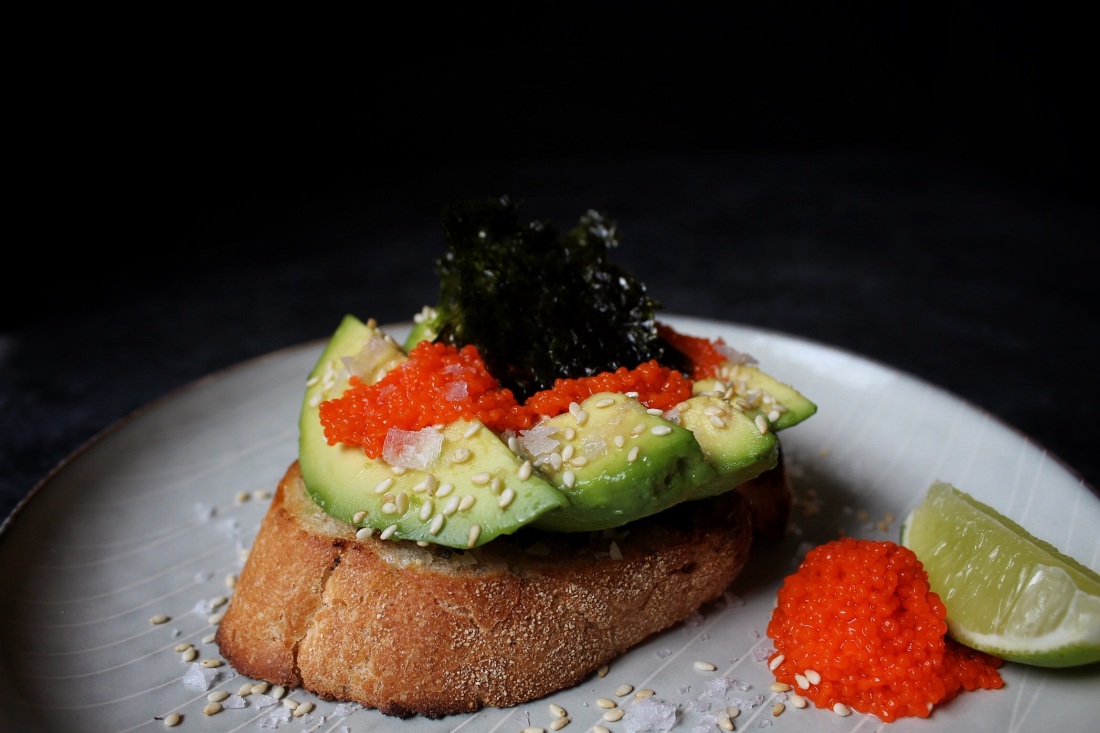 “Alright, Kim’s clearly feeling confident about her creation. Let’s see what that numbnuts… I mean, culinary genius Ryan’s got going on! His toast has just emerged from the broiler and unlike Kim’s, it appears he’s toasted both sides straight without any additional additives. Oh! But what’s that?! He’s now adding some toasted sesame oil to one of the sides – perhaps he’ll be doing a more Asian take on avocado toast. He does know the color of his skin though, right? White kids these days – they think anything from Asia’s cool. Now he’s adding a sprinkle of nutritional yeast on top of the oiled side and is on the move to a new spot in the kitchen!

In a bowl he’s mashing up his avocado with some rice vinegar, salt, and a little bit of xylitol honey. Now he’s stacking his avocado mixture atop the toast followed by some of the same components we saw earlier: large sea salt flakes, vegan caviar, and pieces of toasted nori. It seems that he’s finished his creation. Let’s hear what he has to say about his dish. Ryan?”

“Sorry, we’re actually running out of time here. Can’t really listen to you talk. Let’s show the audience what you’ve gotten yourself into.” 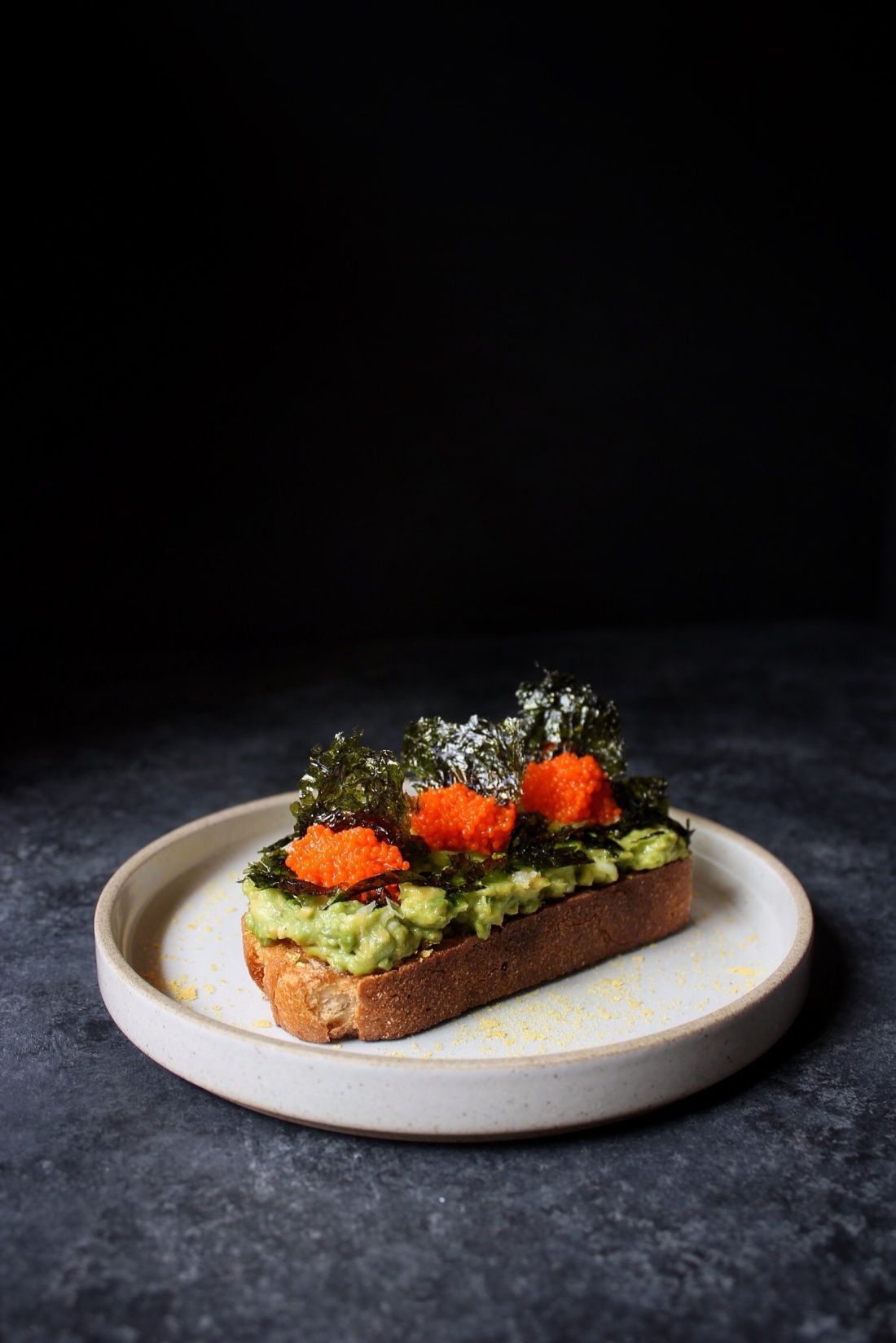 “Thanks Lynda – you killed it out there! I mean seriously – your hair, your body… I mean, your voice, it’s like a Goddess. Ehem. Anyways, what an alright battle we had here today! Let’s put these two against one another in a side by side comparison.”

“Aaaand that’s all the time we have on Battle of the Toast for today! Stop by next time for another ferocious duel between two struggling food bloggers… oh what’s that? The show’s being canceled? Good thing, it was gettin’ real hard to uphold my end of the contract. Well then, I’ll just say this: “Fuck off Amer-…”

Battle of the Avocado Toast

The most hipster food just got more hipster. Twice more.

One thought on “ Battle of the Avocado Toast: Ryan vs Kim ”