“Wait wait wait… WAIT. Did you just say “Viet-Cajun” followed by “Vegan Shrimp? Are you guys insane?! Like, I literally don’t understand food anymore – things are and are not at the SAME TIME. How can Vietnamese and Cajun food have any similarities… and… and… HOW CAN SHRIMP BE VEGAN?!”

Ahh, the food confusion of 2018 continues. Let’s just start off with the whole “Viet-Cajun” thing. It’s true that Vietnam and gulf coast cities (such as New Orleans) are very far apart, but despite their distance, Cajun cuisine and Vietnamese cuisine have one massive similarity: they were both influenced by the French; whether you’re eating Cajun food or Vietnamese food, in some part you’re eating French food. That’s because France occupied Vietnam as a colony from mid 19th century to early 20th, but were actually influencing Vietnam since early 17th century. Cajun culture was formed largely by French Acadian outcasts, who fled Canada to Southern Louisiana late 18th century.

‘So what’ is that both of these cultures have many of their roots in French culture, which directly translates to cuisine. Fast forward to the 20th and 21st century, when Vietnamese people are migrating to New Orleans, Tampa, Houston, and other gulf coast cities, Cajun and Vietnamese cuisine begin to commingle. Combine Cajun ingredients like crawfish and heavy spices with Vietnamese cooking methods and seasonings and you have a new type of cuisine on your hands – one that’s extremely vibrant. 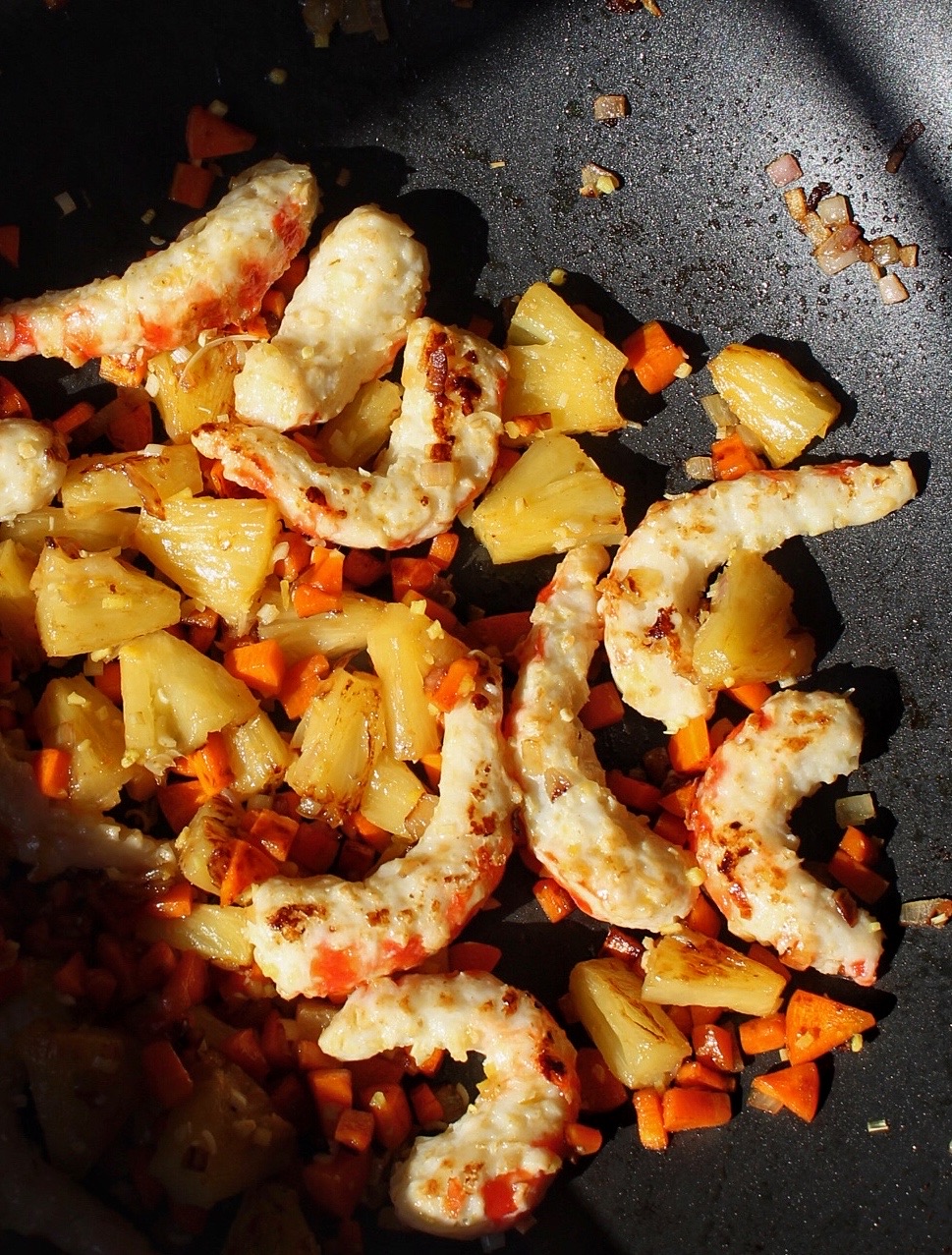 “What’s the deal with the ‘shrimp’ then?”

Ahh yes, vegan shrimp. It swims in the ocean just like… no, it’s actually just made in a factory using ingredients like konjac powder, soy protein, tapioca, gums, and some other things. Freak you out? The ingredients may sound far out there, but they’re all benevolent in terms of health effects as long as you’re buying a trust worthy brand of course. The one that we use is produced by a brand called VegeBest, which is a vegetarian & vegan meat company based out of Southern California that distributes largely to Oriental Markets.

Personally, I love the texture and taste of this vegan shrimp. In fact, I didn’t even like shrimp as a kid, but this is currently my new favorite animal protein replacement. It cooks up quick, has a phenomenal texture, it’s extremely versatile, and it’s affordable too! The best spot to look for it would be in the vegetarian sections of an Oriental market or Whole Foods. 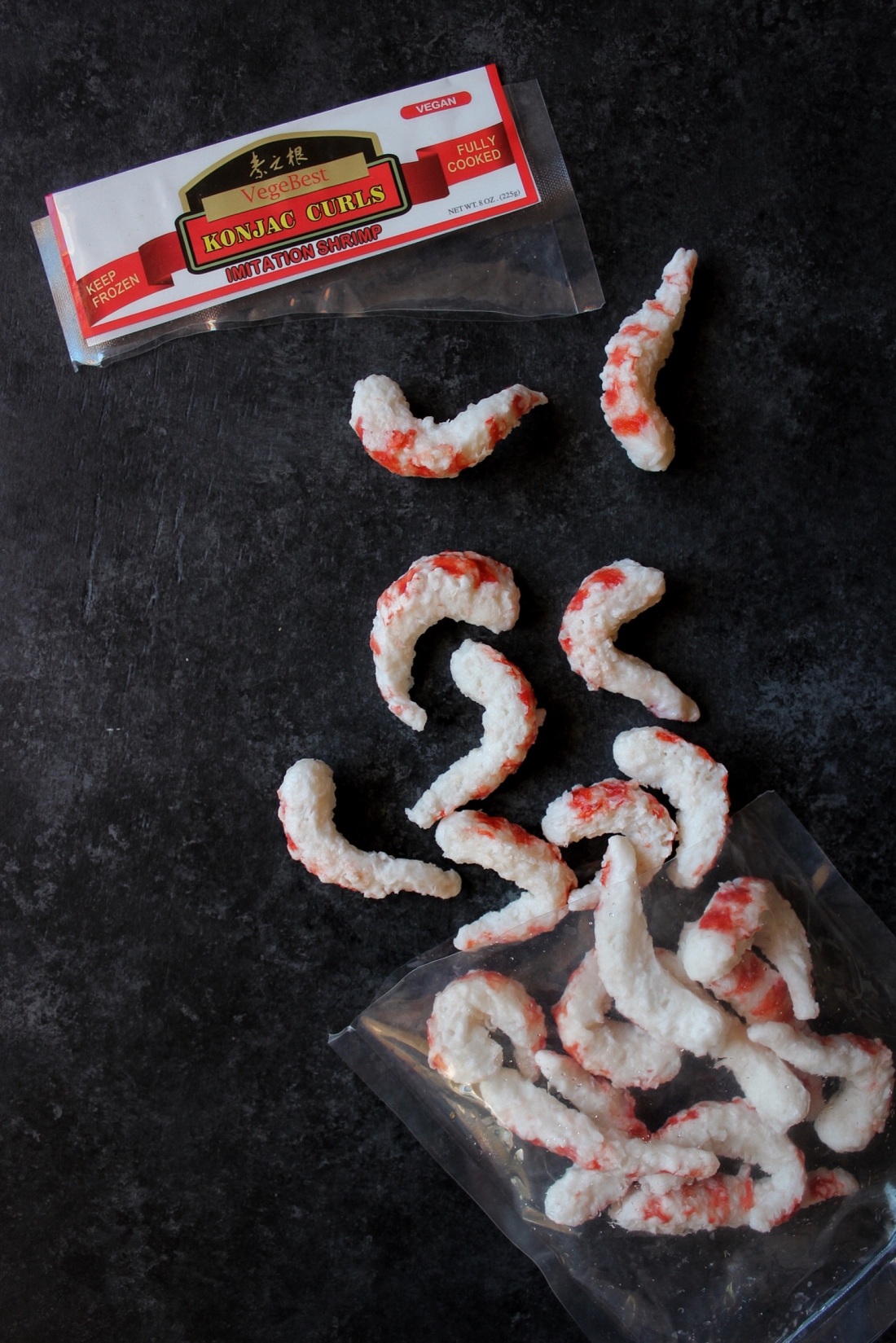 We hope you guys enjoy this fried rice, it’s: 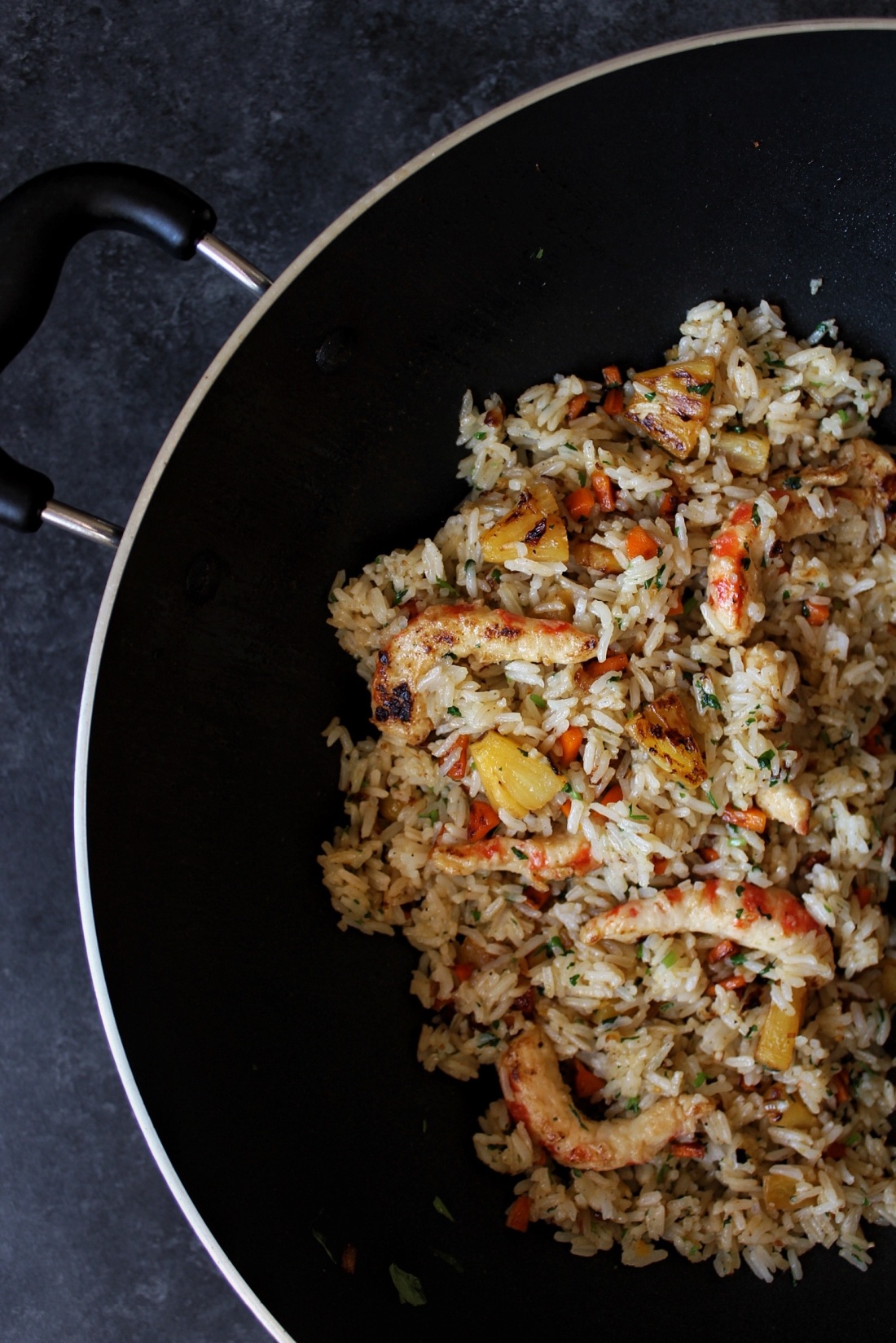 *Lemongrass can be intimidating to chop up, but it’s truthfully very easy. If you get your hands on a whole stock, start by cutting off most of the bottom white part as well as the top green part. You should be left with a piece about 4-5 inches long. Slice this piece in half length-wise and remove several of the outer layers – I usually end up removing 3-5 layers. Now, finely chop up what you have left – the finer it is, the better. It seems like a big plant only to yield such little useable parts, but a little lemongrass goes a long way and at less than $1 per bundle, it’s extremely affordable.

*Vegan fish sauce can be bought in most Oriental Markets for a good price – or, you can make your own! Miyoko Schinner has a recipe for vegan fish sauce that looks spot on.