How To Make an Indulgent, Toasty, & Cheesy Vegan Patty Melt

You guys know what a patty melt is, right? It’s basically a grilled cheese with a burger slapped in the middle. It’s crunchy, it’s meaty, it’s hella cheesy, and yeah, it’s kind of greasy – that’s part of the fun. By looking at a conventional patty melt, you might wonder “how could this ever be vegan?” which is exactly what this post is about! Thanks for joining in.

Let’s show thanks for the CEOs, food scientists, and heck, even to the greedy investors trying to make a buck off vegan food culture, because they’re all part of the reason why have juicy burgers, melty cheese, and rich butter made entirely from plants. It’s because of these people that this vegan patty melt is allowed exist; without them, this sandwich would be nothing more than some pickles between two slices of dry toast!

Okay, since this sandwich is made up predominately of substitutes, let’s talk specifics, because the quality of products and brands you use are going to make a big difference in the end. 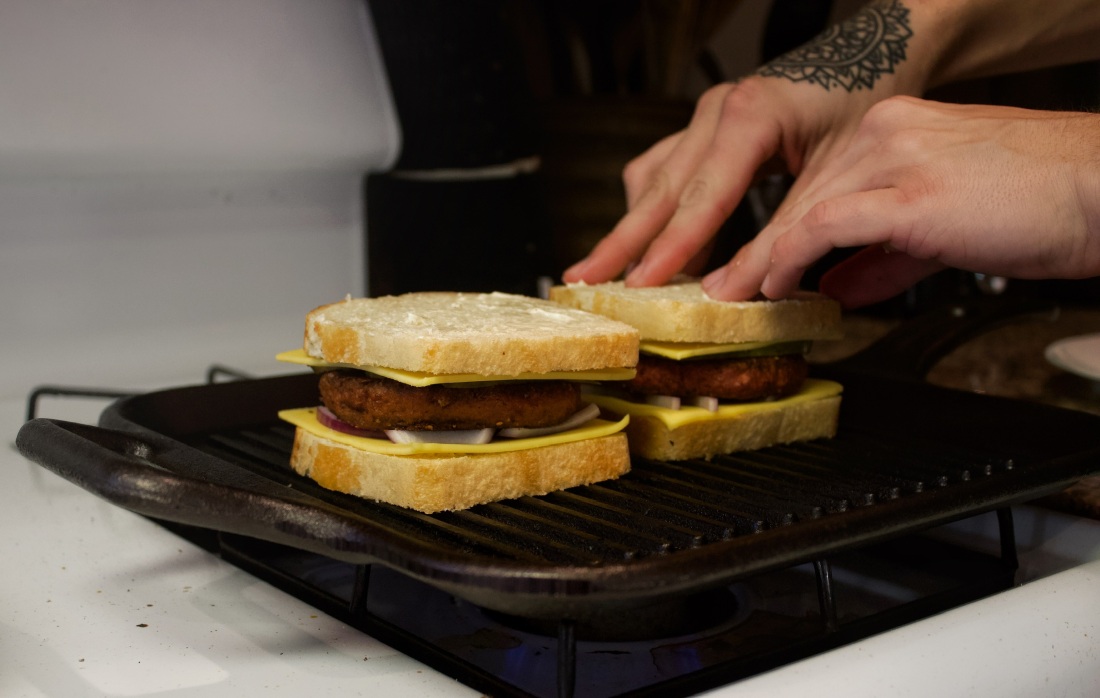 First off, we’re going to need some butter, which we’ve already covered on the blog a few times, but to rehash your memory, our favorite brands are Miyoko’s and Melt. Miyoko’s has amazing body & flavor, and it browns just like regular butter, but it does sit on the expensive side of the spectrum. Melt, on the other hand, is impeccably rich, remains spreadable at refrigerator temperatures, and costs between $4-$5 per container, making it our butter of choice!

Next up is cheese, and there’s quite a few good brands to choose from these days, from Chao to Daiya to Follow Your Heart. Just like with regular cheese, everyone is entitled to their own opinion, but let me tell you, from a completely biased standpoint, what brand you should buy: VioLife. All of their products are great, but their Mature Cheddar Slices are absolutely PERFECT for this application.

… Okay, maybe you won’t find VioLife in Tampa, in which case you can just go with Provolone or American Slices by Follow Your Heart or whatever your favorite is… I guess.

Alright, we’ve finally arrived at our last point: meat. Or lack there of! In our eyes, there’s only two semi-realistic burger replacements out there right now and that is the Beyond Burger and Impossible Burger. While we’re partial to the Impossible Burger, it’s not sold at grocery markets yet, which leaves us with one option: the Beyond Burger. And that’s fine by us because this burger is meaty, tender, chewy, juicy, and perfectly greasy, which is exactly what you want inside a patty melt.

But that’s not all folks, because we’re inviting bacon to this party too! I’ve tried my fair share of bacon substitutes throughout the years, only two of which actually nailed the look, texture, and flavor of real bacon, but unfortunately, those aren’t sold at major markets either. That’s alright though, because even if bacon substitutes don’t look or taste exactly the same as the original, they still have that chewy, seasoned, salty, smoky flavor. Just like with cheese, you’re entitled to your favorite brand, but we’re gonna tell you which one’s right anyways: Benevolent Bacon by Sweet Earth. It’s got big bacon flavor with a chewy texture, making it the perfect addition to our melt.

Okay guys, it’s time to head to the store, load up on some vegan junk food, and assemble our masterpieces, because we’re waving goodbye to mushy black bean burgers, tofu cheese, and underwhelming wholegrain bread. Today we raise the standards of what vegans everywhere eat.

How To Make an Indulgent, Toasty, & Cheesy Vegan Patty Melt

*We prefer French bread for its square shape, refined texture, and sturdiness. However, any rustic square bread will work here; sourdough & rye are other great choices!

3 thoughts on “ How To Make an Indulgent, Toasty, & Cheesy Vegan Patty Melt ”