In my eyes, ramen is a complicated food. Specifically shaped noodles that are perfectly cooked, broth with such depth it’s almost impossible to tell what it’s made out of, and the right amount of the right kind of toppings that overwhelm neither the noodles or the broth, yet bring new flavors and textures into the experience. 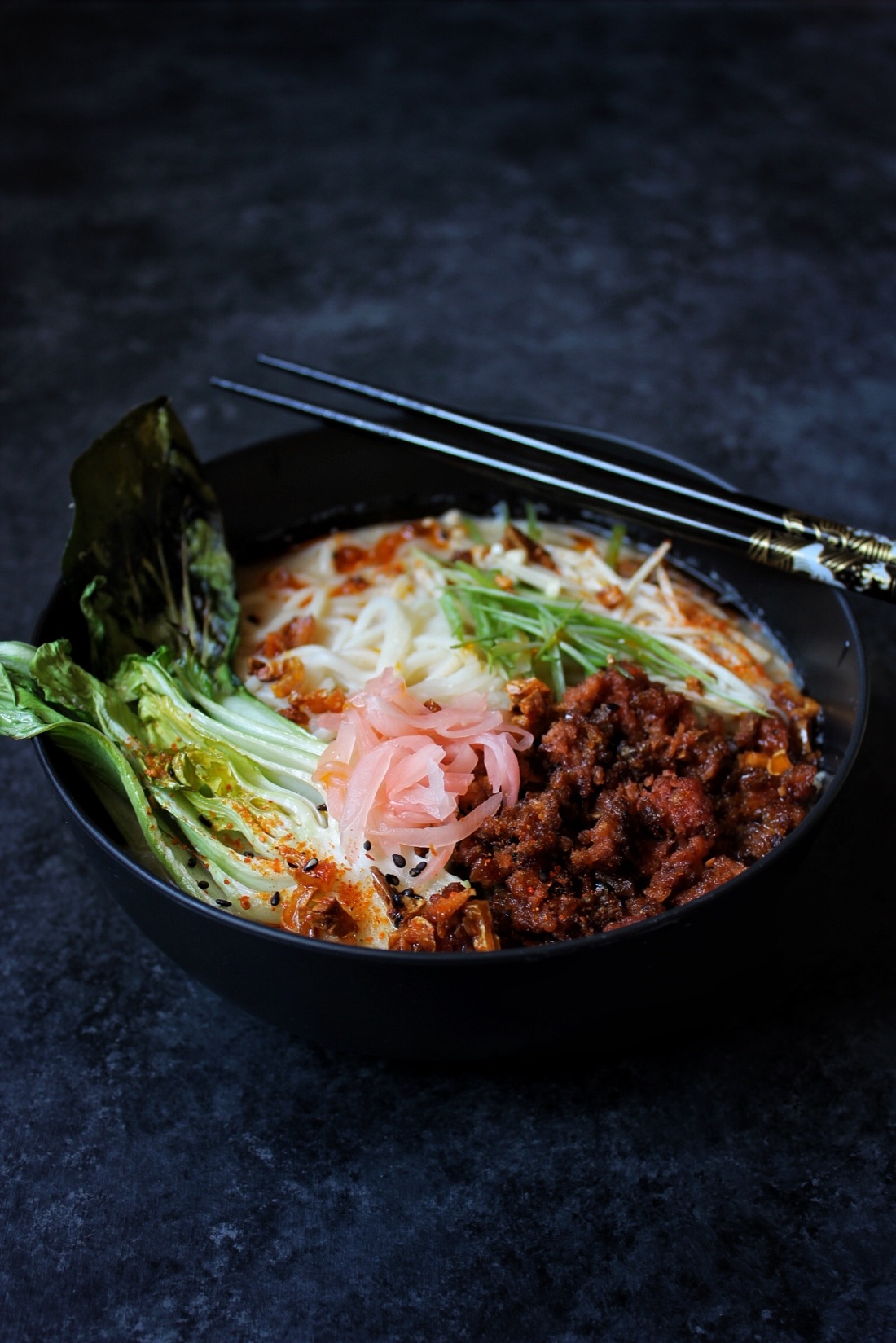 Let’s tackle the most important thing first: The Broth. It doesn’t matter how good your noodles and toppings are, if the broth is lacking, everything goes down with it. There’s also many styles of broth that can be used for ramen, which can vary from region to time of year to the chef who’s making it. While our broth doesn’t specifically fit any of the categorized styles, it’s most similar to Sapporo Ramen, which features a rich broth (usually made from meat or fish) seasoned with red miso paste and served with thicker noodles that can withstand the thick broth.

There’s not a boxed broth out there that’ll do the trick here, which means we’ve got to make our own (don’t worry – it’s not hard). The base of our broth is made by boiling dried shiitake mushrooms for complexity, umami, and depth, dried seaweed for its ocean-y essence, and a handful of aromatics. Combining dried shiitake with seaweed forms a kind of dashi – traditional Japanese stock used in a plethora of dishes – that’ll lend the soup an undeniable depth. 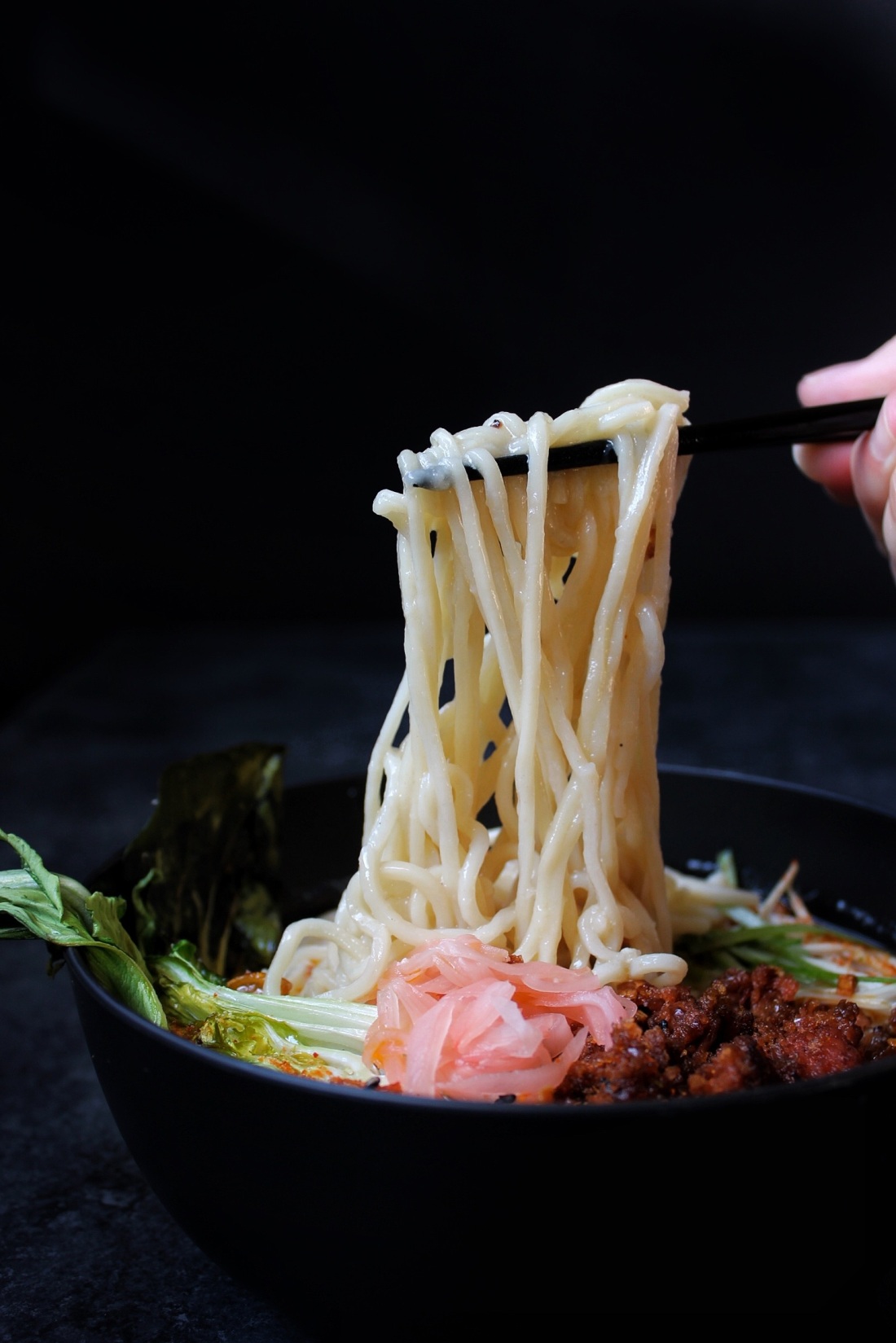 We wanted to accomplish a broth that has a thick, mouth-coating effect, which is why we turned to soy milk to achieve an almost gravy-like feel. Unfortunately, any soy milk won’t do. The soy milk in question should not be sweetened, flavored with vanilla, or – here’s the kicker – contain no emulsifiers.

Let me explain: there are some soy milks out there with only two ingredients – soybeans and water – which are normally my favorite, but they’re susceptible to curdling when they’re mixed with the hot, slightly acidic broth of this ramen. For that reason, you want to choose a soy milk that contains an additive like guar gum, xanthan gum, or carrageenan, as they will keep the soy milk emulsified even once it’s introduced to the broth. Then, to increase the protein and fat content of the soy milk, we reduce its volume by a third, lending it a creamier body.

Finally, to complete the broth, we add red miso paste, which imparts saltiness, depth, and complexity, and a warmth that’ll uplift your spirits and satisfy your deepest appetite. 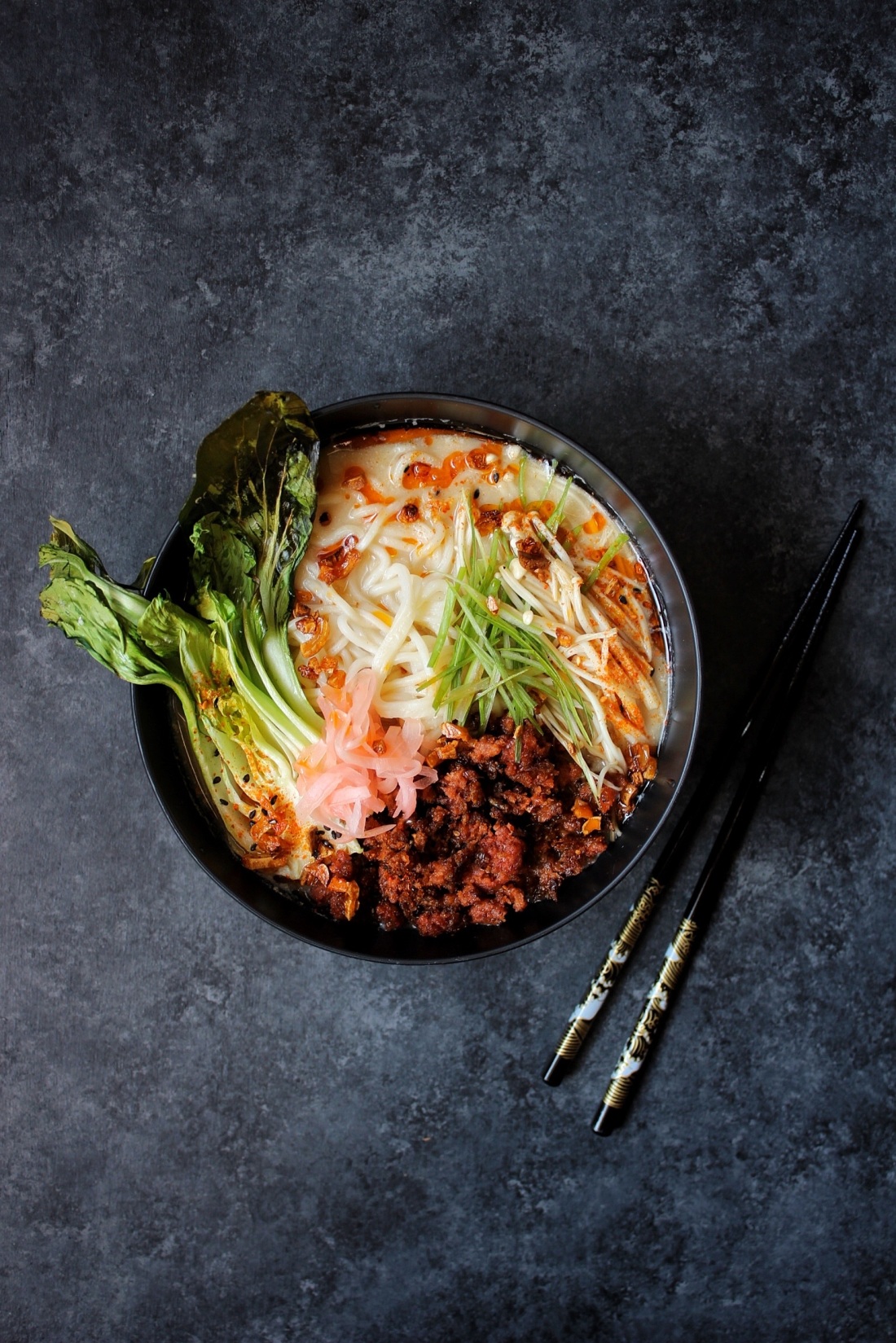 Then there’s the second thing we gotta tackle: Noodles. To your relief, I’m not going to instruct to make your own noodles or anything like that, but that doesn’t necessarily make matters less complicated. See, to my surprise, there isn’t one specific type of noodle to be used for ramen – in fact, the term “ramen noodles” refers more to instant ramen than it does to the type of noodles used for ramen.

Let’s start at the basics: ramen noodles are made from wheat, as wheat has both elasticity and tenderness. From there, it’s all about shape and size. For our broth, you want to pick out noodles that are tubular in shape, wavy while dry, and are of medium thickness.

I can’t recommend enough that you visit an oriental market to shop for your noodles – particularly a Japanese shop if there’s one near you – as they’ll have a large variety of noodles and will likely carry what you need. Also, be sure to check the ingredients before running off with them, as some varieties do contain egg. 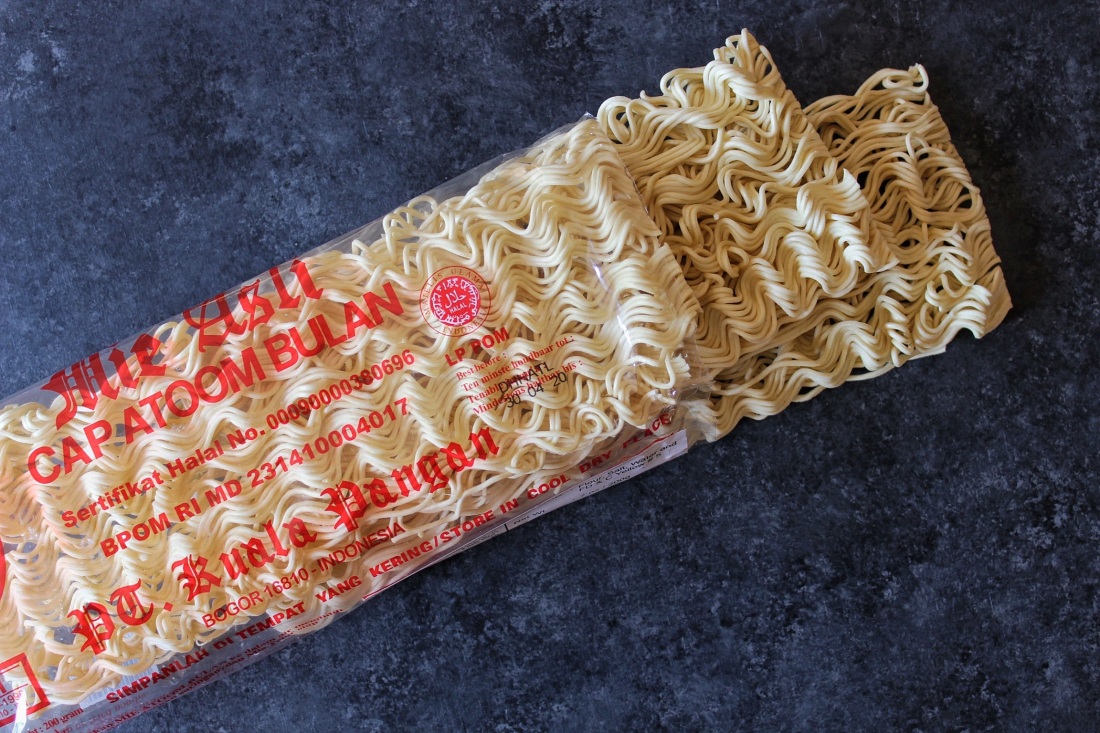 Now for the part where you really get to express your creativity: The Toppings. I’ve had a lot of ramen and the one thing I’ve noticed is that toppings vary from shop to shop. These are the elements we consistently like from ramen toppings: 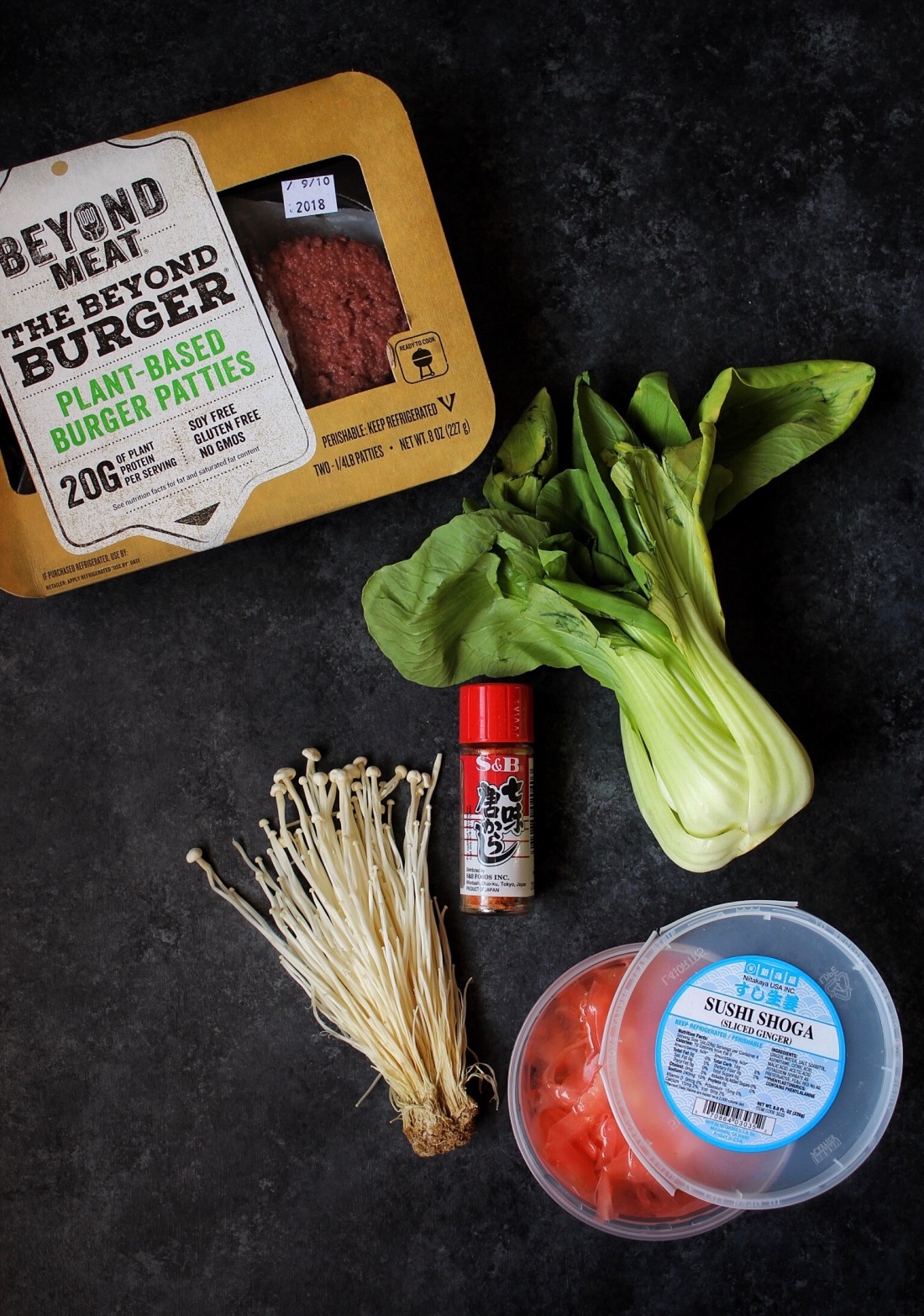 Are you guys ready to eat? I’m gettin’ hungry just by talking about it so much. I’ll let you in on all the nitty gritty details in the recipe! Let’s summarize this thing up so we can get to slurpin’.

Slurp On and Prosper,
Ryan 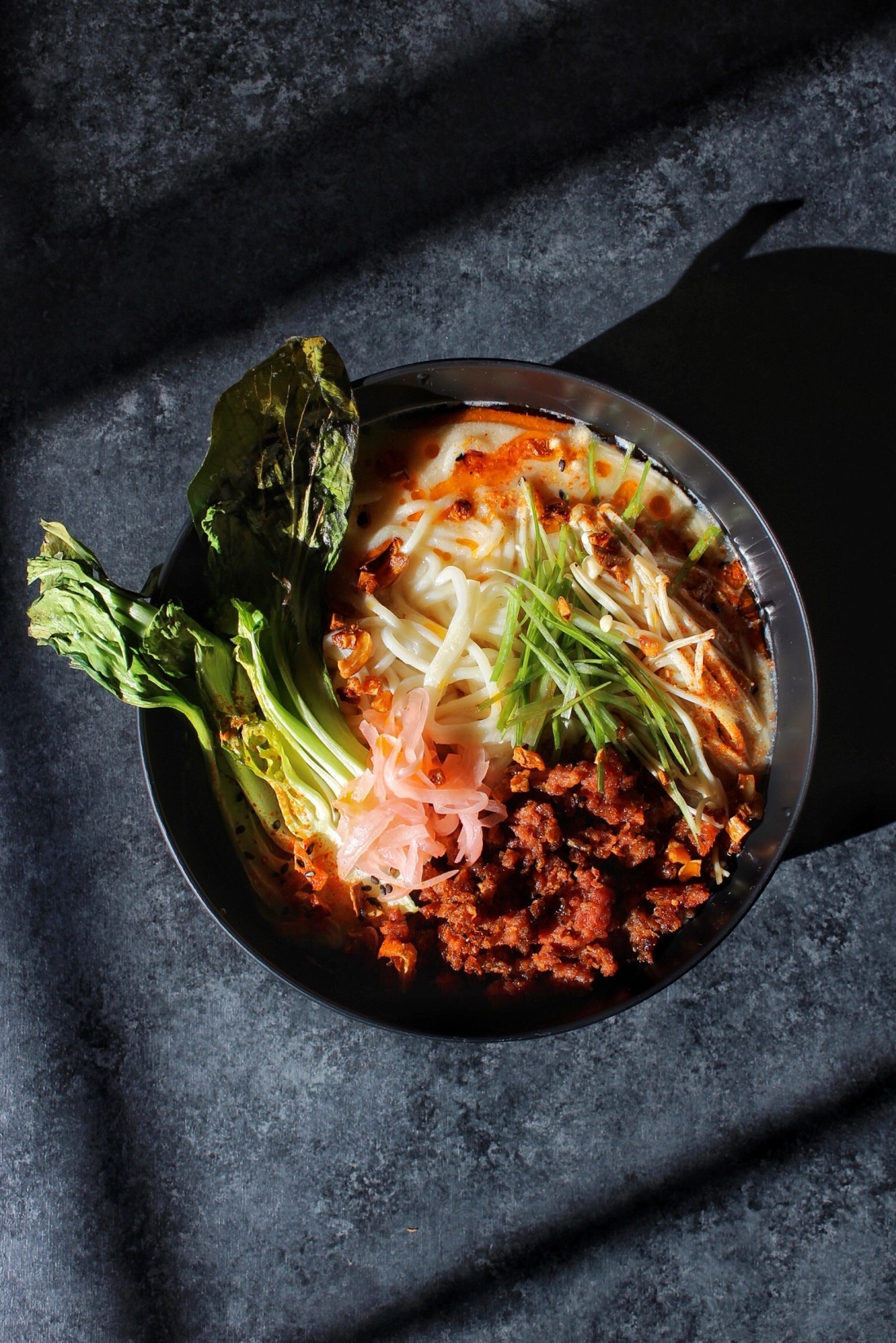 Shiitake-seaweed dashi comprises the base of this rich and full-bodied broth seasoned with red miso. Served with tender & chewy wheat noodles and a plethora of complimentary toppings.

*Use a soy milk that’s unsweetened, unflavored (no vanilla here), and most importantly: use a soy milk with added emulsifiers, such as guar guam, xanthan gum, or carrageenan. Without emulsifiers the soy milk will curdle. Silk or 365 by Whole Foods are two brands with unsweetened soy milk options you should easily be able to find no matter where you are.

*Nanami Togarashi is a Japanese seasoning by the brand “S&B” found in most noodle shops across Japan. It’s simply a mixture of chili pepper, orange peel, black and white sesame seeds, Japanese pepper, ginger, and seaweed. It can be found at most megamarts and Oriental markets.