Did you guys know Snoop Dogg is a cook? Like, one who’s mad good?

“How good” you ask? Well, skilled enough to hold his own alongside Martha Stewart and even win a fried chicken battle against Alton Brown, which got me thinking “what’s this dude’s secret?”

After a little digging, I found the key to his hype-worthy fried chicken: barbecue potato chips. Yeah, he actually spices up his batter with crushed potato chips, which adds flavor, color, crunch, and loads of nostalgia. My friends, this is pure genius. So before we continue, let’s show thanks to the God of stoner rap for blessing us with so much more than Drop It Like It’s Hot.

As you can imagine, there’s more to this dish than just barbecue chips (although that would be pretty fun), so let’s talk about what ingredients & techniques make this the best vegan fried chicken. Before we get there though, I wanna lay down some guidelines on what determines good fried chicken—I’d say it’s a mixture of crunchiness, savoriness, saltiness, spice, and doneness. If one of these elements is overwhelming or underwhelming, it won’t hit that sweet spot in our souls.

First off, we have the dry ingredients, which is a mixture of flour, salt, various seasonings, and, of course, bbq chips. This is a dish where you want to be liberal with the seasonings, as the worst possible trait in fried chicken is blandness. One important spice to highlight is cayenne pepper, because even if you don’t want “spicy” chicken, a little bit of cayenne bumps up the sensory nodes on your tastebuds, giving the chicken a bigger burst of flavor. All purpose flour is the standard for good reason, as it has a little bit of protein, which encourages browning when it’s fried, as opposed to starches, which don’t brown that great because they’re completely devoid of protein. On top of that, the combination of moisture and flour creates a little bit of gluten, which will encourage the crust to adhere to the chicken.

Secondly, we have the wet team, which is a simple mixture of soy milk, vinegar, and VeganEgg. When soy milk and vinegar combine, they act like buttermilk, which is thick, acidic, and a staple for Southern cuisine. Its thickness helps keep flour in contact with the chicken, but more importantly, its acidic nature creates salivation, which lends the final result that “melt-in-your-mouth” effect. VeganEgg is an equally important ingredient that can’t just be replaced by flax or chia seeds because it: 1. Creates a more viscous batter, which helps the flour adhere to the chicken 2. Encourages browning because of its high protein content 3. Sets up when it’s cooked, creating a stronger crust 4. Adds depth to the dish due to black salt, which smells weird when you’re prepping it, but goes unnoticed after it’s cooked. 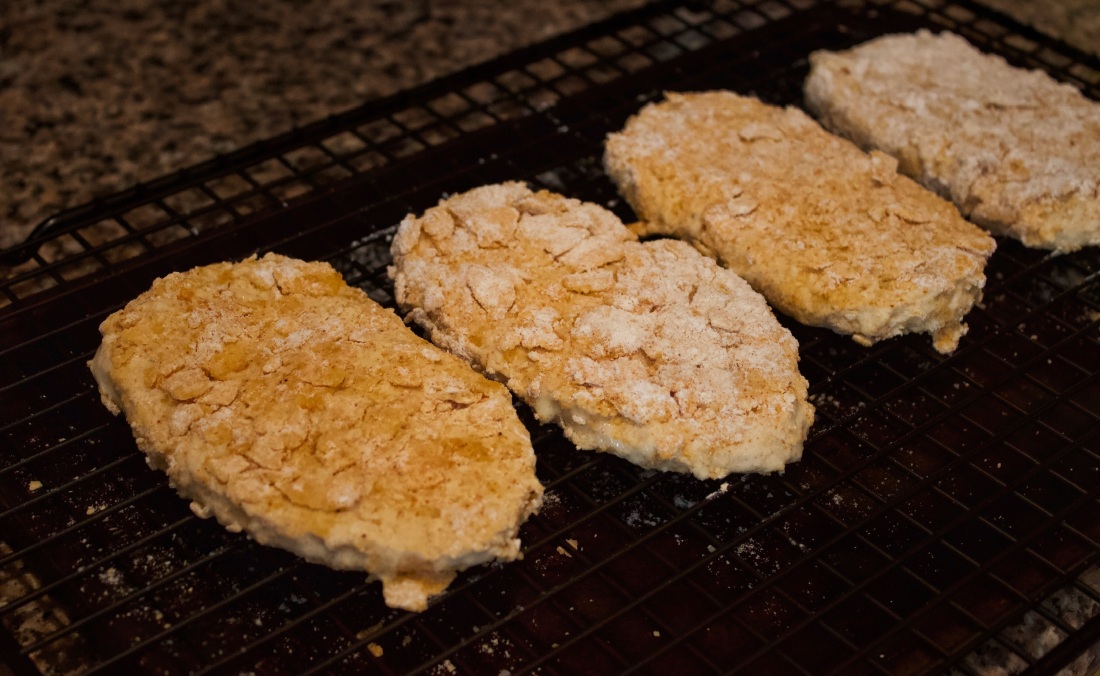 Thirdly, we have the chicken itself—er, fake chicken. While it’s hard to recommend brands because grocery stores don’t always carry the same products, we do have a preference for this recipe: Chick’n Scallopini by Gardein. It’s juicy, tender, and accepting of any flavors you throw at it, just like real chicken breast. If you can’t find Gardein, we advise you choose soy chicken over seitan, as it’s tender, juicy, and the right amount of chewy. Seitan (wheat protein) on the other hand, is more suitable as a pork substitute because it’s dryer, chewier, and tougher than chicken. If your local American grocer doesn’t carry Gardein, check the frozen vegetarian section of an Oriental market for soy meats.

Lastly, technique is equally as important as actual ingredients, so let’s cover the essentials. 1. Be sure your chicken is thawed, which helps the coating stick to the meat. If you use frozen chicken, the coating will fall right off, which happens because it’s too rigid & the moisture pushes out when it’s cooked, creating an airy barrier. 2. Let the chicken rest for 30 minutes once it’s been battered, which will help solidify the coating (can you tell that keeping the chicken & crust together is a top priority?). 3. Use a cooling rack on top of a cookie sheet as a draining rig in place of paper towels, because paper towels hold oil against the food while a cooling rack provides separation, meaning your food won’t get greasy.

Oh, I forgot one thing—serve your chicken with a squeeze of fresh lemon juice. I don’t know why, but something about that bright citrus mixed with deep savoriness results in complete bliss. Yes, it’s mandatory.

Whoo, if you actually read all that, you will soon be rewarded with the best darn vegan fried chicken you’ve ever tasted. If you merely skimmed through, go back and read it! Otherwise you’re gonna be in the comments like “Why did my crust fall off? I used the chicken like it said on the package—right out the freezer!” and frankly, we don’t want you to be that guy. Alright, let’s wrap this up so we can get to eatin’! This fried chicken is:

The saying “this tastes like chicken” isn’t wrong for once

*It’s important that your chicken is thawed in order to help the coating stick to it. Thaw it in the fridge overnight, run it under slowly running cold water for a couple hours, or just leave it covered at room temperature (after all, we don’t have to worry about the same bacteria we do with meat). It’ll likely be very soft – that’s okay.

5 thoughts on “ How To Make Perfect Vegan Fried Chicken ”